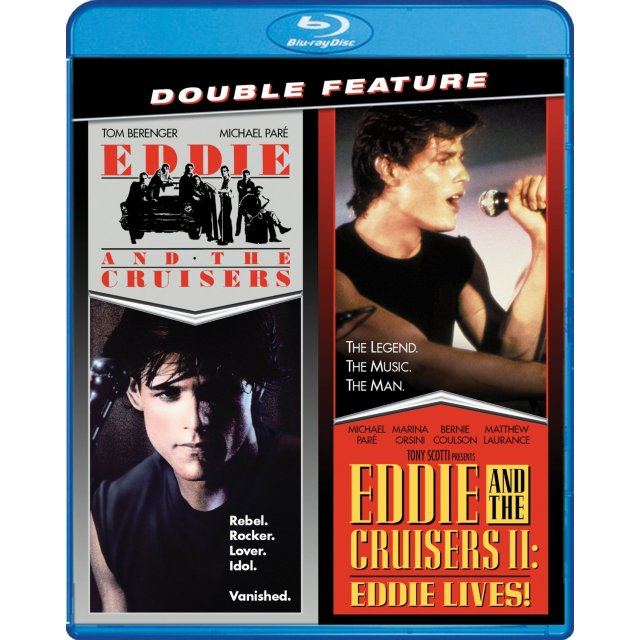 5-15d Expected stock arrival within 5-15 days.
US$23.99
Our previous price:US$ 24.99
You save: US$ 1.00( 4% )
Please take note that, once purchased, this item must be paid immediately and cannot be cancelled or returned.
Manufacturer
Shout Factory
Feature
Tom Berenger, Michael Pare, Joe Pantoliano, Ellen Barkin
Version

Eddie And The Cruisers:
They say rock 'n' roll never dies, but one dark night in 1963, Eddie Wilson's car took a dive off a Jersey bridge with the troubled rock idol at the wheel. His body was never found. Tom Berenger (Sniper), Michael Paré (Streets of Fire), Joe Pantoliano (The Matrix) and Ellen Barkin (Sea of Love) star in this cool, compelling classic that really rocks!

Twenty years after the lead singer (Paré) of "Eddie and the Cruisers" disappeared, the band's songs are hotter than ever. And renewed interest in the band leads TV reporter Maggie Foley (Barkin) to pursue a tantalizing mystery: What if Eddie is still alive? The circumstances surrounding his death are just shadowy enough to make it a distinct possibility, and someone (could it be Eddie?) has been ransacking the homes of surviving band members in a desperate search for tapes of the group's visionary, never-released album. As Maggie interviews the former "Cruisers", the pieces of the puzzle start to fit... but only until still deeper mysteries begin to surface.

Eddie And The Cruisers II: Eddie Lives!:
Get ready to rock! Michael Paré reprises his role as the hot-blooded rebel rocker Eddie Wilson, who, after twenty years, still has "the kind of charisma that drives adolescent girls wild" (L.A. Herald-Examiner).

At the height of fame, rock legend Eddie Wilson (Paré) drove his car into the river and disappeared from the limelight. Twenty years later, his band Eddie and the Cruisers is hotter than ever. Posing as construction worker, Eddie has maintained a quiet life in Canada. But his relentless desire to make music pulls him back to the stage where he forms a new band and an even hotter sound. Meanwhile, to cash in on the revived interest in the band, record executives release an Eddie and the Cruisers "lost tapes" album and promote a worldwide search for the mysterious rocker. As his new band hits center stage, Eddie finally faces the past – his way.