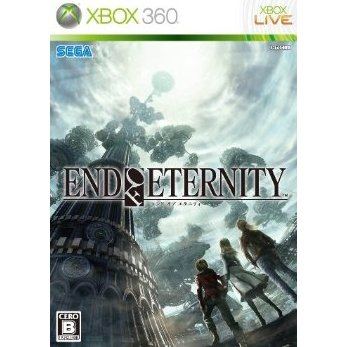 End of Eternity, or Resonance of Fate is Sega's next hit. Produced by Tri-Ace, the company that created stellar games such as the Star Ocean and the Valkyrie Profile series now takes on a project that illustrate the struggles of a group of youths in an apocalyptic world.Due to large scale pollution, the world has become an almost inhabitable place. People live in Barcels, a massive capsule created by ancient technology, however, even this tiny world is falling apart. It is in the middle of this chaotic era that three young people came together to create a new history.Carry your hand guns and other firearms and create a rain storm out of bullets. Make use of the items, know the characters' strengths and strategize your battles. The game makes use of a semi-real time battle system, carry out your offense and defense plans and shower your opponents with bullets.

If you are familiar with End of Eternity (Platinum Collection), why not let others know?

[This review is based on another version of this product]
Exebiel (29) on 11, Jun. 2015 13:12 (HKT)
Matrix-like RPG with a touch of good comedy & action
The atmosphere of this game reminded me to enjoy an original game style, the conversations (voice acting), BGM and the battle system. It has a unique and simple way to get fun.

Conclusion, this game is a gem.
[This review is based on another version of this product]
mivaness (19) on 14, Feb. 2015 15:14 (HKT)
Intriguing gameplay
This game is definitely different. Some people say this game is hard. Well, it is... but if you get a hang of it, it's not. What's hard is getting your characters to level up.

You level up by fighting but it also depends on the level of your guns. So you need to switch guns otherwise it'll be hard for you to level up. You have machine guns and hand guns. You also have grenades and molotovs. The higher the level of your guns, the more recharge ring you'll have which means more bonuses and more multiplied damage you'll give.
There are 3 main characters and you can make them hold any type of guns so you can level up easier.

Aside from the complicated leveling up, you get to enjoy buying clothes for your characters. You can even change their haircolor and eye color. Some items are dropped, found in treasure chest or being sold in the boutique. You unlock more as you progress with the story.

Speaking of story... you start with a scene where you rescue a girl who was trying to ... kill herself. You caught her and the two of you fall down the tall tower that you live on. No explanation as to why she jumped or how you ended up staying together in a more run-down area was given when you wake up to start your game. The story is divided by chapters. But usually each chapter is a conclusion. You get a quest, you go fetch something, you fight a boss, you finish the quest, you end a chapter. There are side-quests you can do within that chapter that you'll lose if you continue the chapter before finishing it.

The artwork looks really cool. You can have all 3 characters walk around the town kind of like rogue galaxy and your costume changes depending on what you make them wear. The color tone is pretty bland though. It doesn't get colorful. At most, you get a golden bright rich looking place.

I don't regret buying this game though. It's a lot of fun to play but you do need a lot of practice to get used to the fighting style. Good thing they have a place for you to practice at.