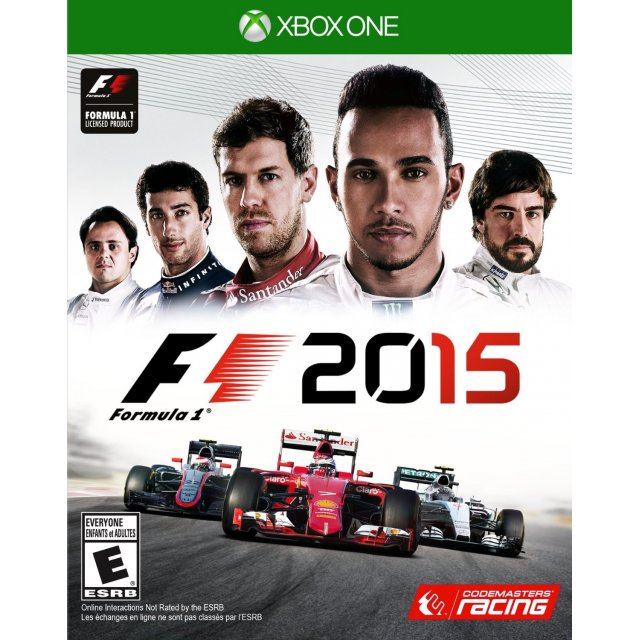 Codemasters
Compatible with Xbox One™ (XONE™)

Works on all systems sold worldwide, a correct regional account may be required for online features.
1w Expected stock arrival within 1 week.
US$67.98
Manufacturer
Codemasters
Compatible With Xbox One™ (XONE™)
Version

Click on a thumbnail to see more pictures for F1 2015

Formula One 2015, the world’s most glamorous, exciting, and prestigious Motorsport in history is a proud masterpiece developed from ground up by Codemasters' brand new EGO game engine to give fans a whole new level of racing, featuring championship and pro season modes, a physics-based handling model, new broadcast presentation style, and stunning visual realism.

Race like a champion in the new Championship Season and push yourself to the limit in the new and very challenging Pro Season mode. Refine your skills in the new Online Practice Session and challenge your friends or racing rivals from across the world in Online Multiplayer. F1 2015 also includes a fully playable 2014 FIA FORMULA ONE WORLD CHAMPIONSHIP™ with cars, drivers, and tracks from the 2014 season as bonus content.

F1 2015 is incomparably more spectacular than its predecessor for its vast improvement in handling and visual fidelity. Players can now experience a much more accurate difference in performance between mechanical and aerodynamic grip with the game’s improved vehicle dynamics. A new force feedback systems and the new tyre model gives players the feeling of authenticity as the car and track surface interacts. Players can now experience the changes in grip caused by temperature changes, wear, car set-up, debris, and weather conditions.

(PS4 & XONE Exclusives)
By bringing the F1 franchise in the next-gen consoles, Codemasters offers two exclusive features for the PlayStation 4 and the Xbox One users. An all-new voice recognition technology that allows players to engage with their race engineer, and the new broadcast presentation style which recreates the unique race day atmosphere of a GRAND PRIX™, complete with podium and grid sequences. With all its massive improvements and new game engine, F1 2015 will deliver the ultimate Formula One video game experience!