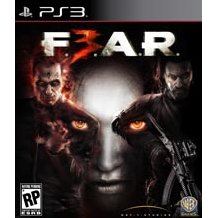 sold Out of print / Out of stock.
Manufacturer
Warner Home Video Games
Rated By Our Customers
Compatible With PlayStation 3™ (PS3™)
Version


Click on a thumbnail to see more pictures for F.3.A.R.

[This review is based on another version of this product]
side.aura (156) on 24, Mar. 2015 10:12 (HKT)
Good!
-First Person Shooter Against Zombies
-Single Player Co op Campaign
-Multiplayer Survival/Versus Mode
F-14 D (52) on 31, Mar. 2014 12:52 (HKT)
Great Co-op
Fear 3’s story picks up after the events of Fear 2 and this time you get to play as point man the original protagonist and in a thrilling twist also as Paxton Fettell the Antagonist of the original Fear.