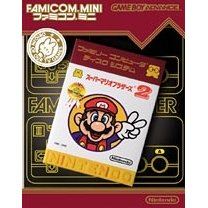 This is also known outside Japan as Super Mario: The Lost Levels (See Super Mario All-Stars on SNES).

If you are familiar with Famicom Mini Series Vol. 21: Super Mario Bros. 2, why not let others know?

The Mario 2 we know was actually a game called dori dori panic, with Mario characters over the original ones, which is why it played so differently.

This was actually released on Mario Allstars for the SNES but was called The Lost Levels.

This is the same format as SMB 1, but harder and definately worth a try if you can find a copy!
on 27, Mar. 2005 03:22 (HKT)
An incredible game!
This game is like no other game I have ever played before; there are poisonous s that make you small or they kill you (it depends on whether you\'re big or not), winds that blow you backwards, and green springboards that balst you high in the sky. Some castles even have 2 Bowsers in them!Trust me, this game is worth the money.
Anonymous on 19, Mar. 2005 09:12 (HKT)
The ORIGINAL Super Mario Bros. 2
This game may be a challenge but it\'s awesome; there\'s NO OTHER GAME LIKE IT!!! I strongly recommend it for ANYONE interested in a challenge.
johannes on 09, Feb. 2005 02:42 (HKT)
get this chance
this game rock,s it,s a perfect port of the nes version, despites of the inzoomed screen(low res gba)and the slower game.
the game has some new sound,s,graphics and more abilities than smb1.
the gameplay is very hard asspecialy in the beginning everything,s slower than on the nes.
but than,when i have learn some world,s out my head, i can now play the game to world 4.
this is a classic a must have game for peoples who have,s never play and get the chance to get it on the nes get this game now!!!

Super Joe on 22, Nov. 2004 14:55 (HKT)
The REAL Super Mario Brothers 2
Unbelievable experience. This game was meant to destroy to the player, and believe me it is a challange through and through to the final final stage. People, there IS no other game out there that tests video game skill like SMB 2 Japan. Like Mario, cool, but if it is challange you seek, then get this game. I kid you not, I have played many games my friends, this IS THE HARDEST GAME EVER MADE. Enjoy : )
1 »