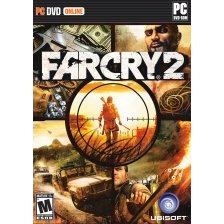 Ubisoft
Rated
By Our Customers
Compatible with Windows™ (PC)

sold Out of print / Out of stock.
Manufacturer
Ubisoft
Rated By Our Customers
Compatible With Windows™ (PC)
Version


Click on a thumbnail to see more pictures for FarCry 2

Far Cry® 2, the next-generation first-person shooter from Ubisoft, will take you deep into the most beautiful but also most hostile environments in the world: Africa! More than just a visual and technological achievement, Far Cry® 2, the true sequel to the award-winning PC game, will provide you with an unprecedented gaming experience.Caught between two rival factions in war-torn Africa, you are sent to take out "The Jackal," a mysterious character who has rekindled the conflict between the warlords, jeopardizing thousands of lives. In order to fulfil your mission you will have to play the factions against each other, identify and exploit your their weaknesses, and neutralize their superior numbers and firepower with surprise, subversion, cunning and, of course, brute force.

If you are familiar with FarCry 2, why not let others know?

gogoyubarismooth (289) on 06, Aug. 2012 20:19 (HKT)
amazing game
amazing game
solid_snake002 (1) on 04, Nov. 2009 06:28 (HKT)
Great Game
it is a great game, very enjoyable from the begining to the end, very challenging too, the multiplayer mode its amazing and very funny. Good graphics too. a little repetitive but still very enjoyable. Great crude and realistic physics, sounds and story. Completly recomended. Play-asia 100% trustable for buying games.
popopopongi (3) on 14, Oct. 2009 12:44 (HKT)
Good game
Story,system and graphics are very good.
But this game crash sometimes.
PuNiao (365) on 28, Jan. 2009 16:28 (HKT)
FarCry 2
Like many open-ended games, Far Cry 2 is one that can be frustrating during the first hour of play but fully rewarding as you delve deeper. You play a hitman sent to a war-torn African country, but end up being a gun-for-hire used by its various factions. The game has some of the most innovative features in a first-person shooter in years. Let's start with the landscape. For the first time, you not only destroy things like crates (yawn) but also set fire to a dry patch of grass to force your enemy into a corner. You can wait until nightfall, when visibility is poor, to strike fear into them with a sniper rifle. Or how about firing a round into an ammo cache and seeing the stray bullets being sprayed in all directions? It is devilish but so much fun. The environment is so dynamic that no single gunfight ends up the same way.

Wind direction counts too. If you throw a fire bomb into the grass, make sure the heat does not spread back towards you. The computer opponents and friendly buddies, who will save you should you be injured, are also pretty smart. When you snipe at the enemy, they will usually take cover behind a building. Braver ones will hop onto a Landrover and gun for you. You just never know what you are going to get next, I ended up looking over my shoulder more often than in any shooter I have played. The weapons are great too. The flare gun gives you a nice bush fire when you shoot it into the grass, while the flame-thrower is the ultimate short-range weapon - just one burst of the flame and everything in its wake gets incinerated. To make things more realistic, weapons jam during fights and the way the characters clears, say, an M16 rifle, is as realistic as the way you would do it when you are in national service. Graphics-wise, I would say Far Cry 2 is excellent, though slightly short of what Crysis offers in terms of dynamic lighting. But then again, Far Cry 2 has a truly interactive environment - you will be spellbound standing there, watching a tree catch fire and being consumed to the last leaf.

I would have given it a 9/10, if not for the fact that some parts of the game are repetitive. Unlike Grand Theft Auto, not much of the story is integrated into Far Cry 2's gameplay. Sometimes you seem to be attacking an endless bunch of guard posts and convoys on the way to a mission. To make things more frustrating, you sometimes do not "unlock" a guard post despite killing everyone there. The other bug is that you die - ostensibly from malaria that you got early in the game - whenever you stray out of some designated area of combat. Strange because it gives lie to the idea that you can freely roam about every place on the map, a la Grand Theft Auto. However, despite these problems, the game still gets you going because of its biggest strength - the dynamic gameplay. No other shooter I have played since Quake, that seminal first-person shooter in the 1990s, have redefined gameplay as much as Far Cry 2 - and that is high praise.
[This review is based on another version of this product]
loadstone007 (5) on 03, Jan. 2009 05:19 (HKT)
Very good
Great graphics, great gameplay, good story. The downside is that the gameplay tends to get repetitive... and I sold the game without completing it (was getting to annoying and boring).