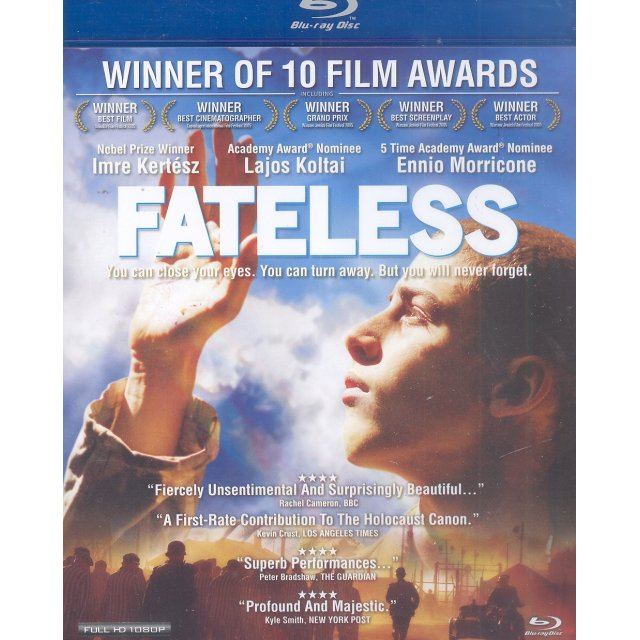 Fateless is a deeply moving tale of a Hungarian Jewish boy and his quest for the meaning of his past.Based on the 2002 Nobel prize-winning novel by Imre Kertesz, Fateless chronicles the attempts of 14-year old Gyuri Koves to reconcile the unimaginable horror of having been incarcerated in German concentration camps. On his return to Budapest, Gyuri finds those around him treat him with indifference. His friends and neighbors encourage him to put the past behind him, while an intellectual sympathetic to the personal and political terror of his past repeatedly refers to the camps as "the lowest circle of Hell." Gyuri finds neither comfort nor meaning in these clinches. Increasingly troubled by the meaninglessness of his experiences, he gives human motives to the inhumanity of his captors, which helps maintains his tenuous hold on the world. Lacking emotional and spiritual ties to his Jewish heritage and feeling rejected by his country, he concludes that neither his Jewishness nor Hungarianess is really at the heart of fate.The directorial debut of acclaimed cinematographer Koltai, this sweeping, profoundly moving drama offers a new perspective on one of modern history's darkest junctures, as the 14-year-old Gyurka is shuttled between the death factories of Auschwitz-Birkenau, Buchenwald, and Zeitz - all the while, maintaining his stubborn, stoic belief that "there's nothing too unimaginable to endure." Vast in scale, yet boasting a remarkable historical detail, and with a sweeping score by Ennio Morricone, this is a work of immense compassion, unlikely beauty, and shattering power - a true testament to the resilience of the human spirit.

No reviews for Fateless yet.