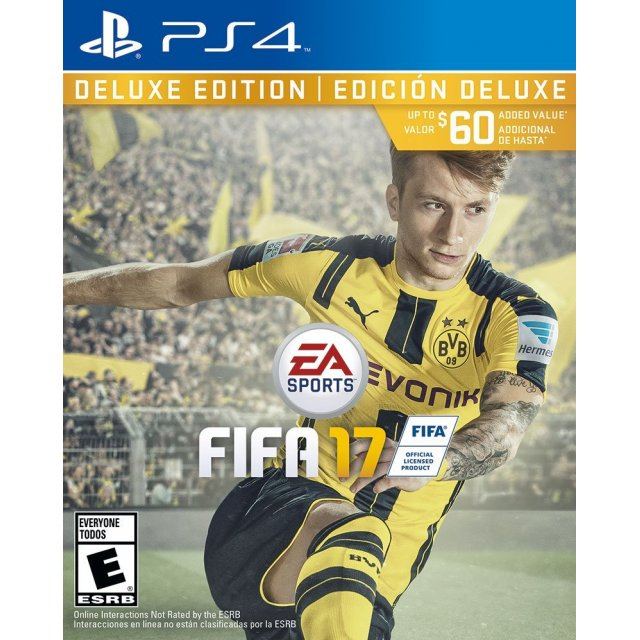 Works on all systems sold worldwide, a correct regional account may be required for online features.
24h In stock, usually ships within 24hrs. (Only 1 left in stock.)
US$9.99
Lunar New Year Sale
Limited time offer - Secure yours now before the offer expires!
Our previous price:US$ 83.99
You save: US$ 74.00( 88% )
Manufacturer
Electronic Arts
Rated By Our Customers
Compatible With PlayStation 4™ (PS4™)
Version

Works on all systems sold worldwide, a correct regional account may be required for online features.
24h In stock, usually ships within 24hrs
(Only 1 left in stock.)
Price
US$9.99
Lunar New Year SaleLimited time offer - Secure yours now before the offer expires!
Our previous price:
US$ 83.99
You save:
US$ 74.00( 88% )
Play-Asia.com Return & Refund Policy
Trustpilot
Trustpilot
Click on a thumbnail to see more pictures for FIFA 17 [Deluxe Edition]

Powered by Frostbite, FIFA 17 transforms the way you play, compete, and emotionally connect with the game. FIFA 17 immerses you in authentic football experiences by leveraging the sophistication of a new game engine, while introducing you to football players full of depth and emotion, and taking you to brand new worlds accessible only in the game. Complete innovation in the way players thinks and move, physically interact with opponents, and execute in attack lets you own every moment on the pitch.

FIFA 17 Deluxe Editionincludes:
- Full game
- Up to 20 FIFA Ultimate Team Jumbo Premium Gold Packs (1 per week over 20 weeks - worth up to £40+)
- 3-match FUT Team of the Week loan player (up to 1 player per week over 20 weeks)
- 8-match FUT loan item of Hazard, Martial, Reus, or Rodriguez
- Custom FUT kits created by designers or FIFA soundtrack artists

If you are familiar with FIFA 17 [Deluxe Edition], why not let others know?

[This review is based on another version of this product]
xxdeadpeacexx2000 (13) on 19, Dec. 2019 13:44 (HKT)
Great game
There’s fun to be had on New Zack Island, although we wish it drilled down on two or three things rather than the assortment of slighter activities it offers. Ultimately, Dead or Alive Xtreme 3: Scarlet is a minigame compilation that you play repeatedly to earn money to buy costumes for busty supermodels. Opportunities to photograph them in ever more leery ways unlock as you go, and that’ll have to be enough to satisfy you for the long term because the games themselves pall after a few hours. Like most beach holidays, they’re fantastic in theory, but once you’re there and twiddling your thumbs for things to do, it can get a bit dull.
[This review is based on another version of this product]
nikhazy.akos (1) on 25, Oct. 2019 13:32 (HKT)
Its a fun game from a forgotten era
It is what it is. They know people will import this, so it has English in it.

I feel this is a collectors item, especially in the west for the following reasons:
-its only released in japan
-it is an erotic game on a family friendly system (not that the Nintendo today is hard on not family friendly games but the legacy is there)
[This review is based on another version of this product]
shadowmega13 (1) on 02, Oct. 2019 11:41 (HKT)
Epic remaster
This game was my childhood and its an amazing port for the Nintendo switch
[This review is based on another version of this product]
louisa_beutler (4) on 30, Sep. 2019 02:15 (HKT)
Like Fortune But With Minor Addition
Perhaps my expectations for this one were a bit high because I thought they might have added more than just two characters. But that was not the case.