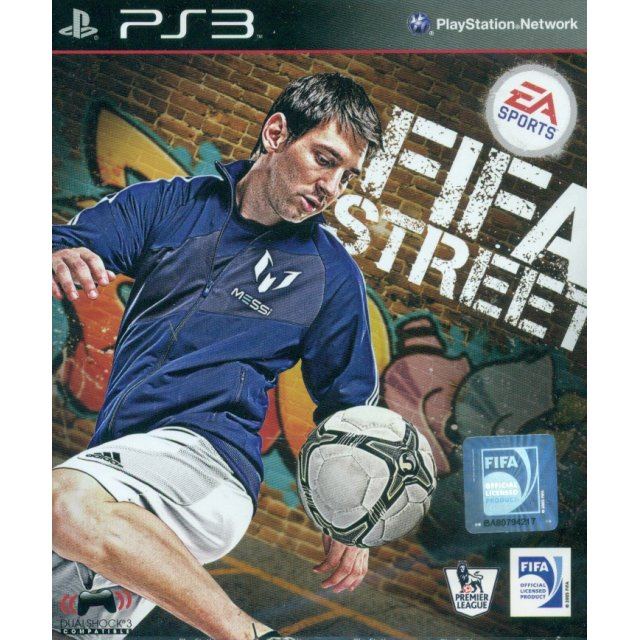 sold Out of print / Out of stock.
Manufacturer
Electronic Arts
Rated By Our Customers
Compatible With PlayStation 3™ (PS3™)
Version


Click on a thumbnail to see more pictures for FIFA Street

From the creators of the award-winning EA SPORTS FIFA Soccer franchise, and inspired by street soccer styles and stars from around the world, FIFA Street is the most authentic street soccer game ever made. Enjoy a unique and fun experience where everything from the environments to the gear to the music is true to the sport and its culture.

Whether performing one panna after another without breaking a sweat the way the game is played in Amsterdam, or a physical, fight-for-possession style the way players compete in London, fans will enjoy a superior fidelity of ball control and responsiveness than anything ever experienced. Plus, for the first time ever, utilize aerial skills to maneuver past opponents, an all-new sophisticated wall-play mechanic and over 50 brand new spectacular skill moves.

Michael Jackson The Experience
US$ 32.99

If you are familiar with FIFA Street, why not let others know?

[This review is based on another version of this product]
blacklunira (69) on 26, Mar. 2020 13:30 (HKT)
Fifa Street Us Version PS3
Mini football!))) I like this branch from the Fifa series. Graphics and style as in Fifa. But the gameplay is very different. As a fan of Fif, I recommend the game to buy!
[This review is based on another version of this product]
william.fu (67) on 22, Apr. 2015 00:41 (HKT)
STREETFOOTBALL the next generation of Football
Street Soccer is more than just a sport match or game, its even more than the field soccer that we know on television. Its about the beauty of tricks and skills, and also how we express ourselves as players through our skills, sportsmanship, and athletic ability. You will experience the TOTAL STREETFOOTBALL Skills, either FREESTYLE or GROUNDMOVES to use it all on the pitch and create your own spectacular gameplay. GAME MODES include 2 VS 2 PANNA MATCH, FUTSAL, 5 VS 5, or you can CREATE YOUR OWN CUSTOM Match.
If you are familiar with the world of STREET SOCCER, you will find most of the faces from youtube Street Soccer Pioneers such as SEAN GARNIER, SOUFIANE BENCOCK, EDWARD VAN GHILS, ISSY HITMAN, NABIL KILLER, and many more! Play Against them so you can recruit them! or just create a stronger version of them to show your love for Street Soccer.
[This review is based on another version of this product]
kingdranix (1) on 14, Apr. 2015 20:45 (HKT)
WIsh can set longer match
Played it on demo with friends but the time is too short. So I bought this. Gameplay is more varied than ordinary football and don't count on the ai on hard mode.
Even if the match feels short, it is still fun and funny to watch the players trip.
[This review is based on another version of this product]
morajosel (1) on 12, Aug. 2014 09:24 (HKT)
Football Street Fun
FIFA street is a real fun game. The different game mode options keep you entertained for a very long time. Love the street style football gameplay
uberLAB (29) on 28, Jan. 2013 13:35 (HKT)
Arcade Fun
Basically a futsal game played by top flight football players, this game can be VERY fun if you're playing against a human.

Almost reminiscent of the old arcade "Street Hoop" by Data East circa '94.