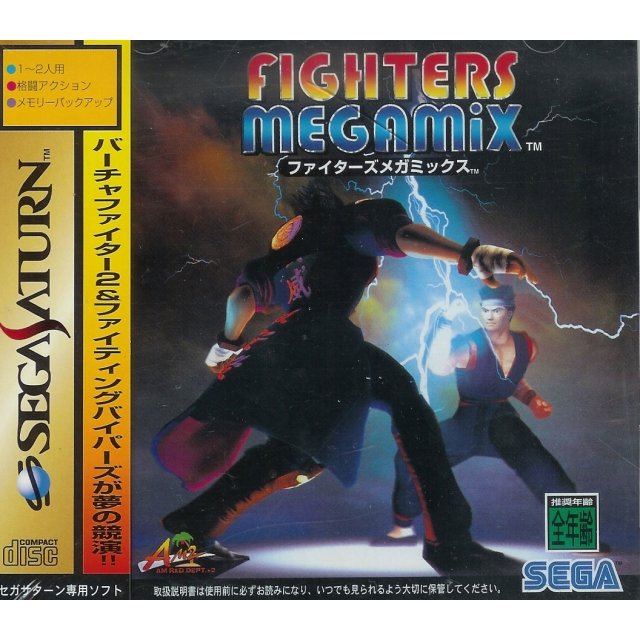 Sega
Rated
By Our Customers
Compatible with Sega Saturn™ (Saturn)
For JPN/Asian systems only.

In Fighters Megamix, another game has been added, a game called Fighting Vipers. Fighting Vipers has drastically different gameplay than the more popular Virtua Fighter 2. Instead of being sophisticated, Fighting Vipers is simplified to appeal to a wider audience of video gamers and was meant for "casual" gamers.

Mixing a simplistic video game and a sophisticated video game must have been difficult. But Fighters Megamix manages to do so by offering many options. The most important option available is the choice of having Fighters Megamix run under the Fighting Vipers style of gameplay or the Virtua Fighter 2 style of gameplay. Other options are unlockable while playing the game.

One good thing about mixing two games into one is that the game would include more selectable characters. Not only are there the 22 characters from Virtua Fighter 2 and Fighting Vipers but there are also 10 other hidden characters that can be unlocked by playing well in the Saturn version, including two from the arcade-only Sonic the Fighters. There are only 4 characters from Virtua Fighter 2 and 4 from Fighting Vipers in the Game.Com version.

This game was one of the very last games to appear on the Sega Saturn in the United States and was directed by Yu Suzuki.

If you are familiar with Fighters Megamix, why not let others know?

n3kketsu (29) on 09, Jul. 2011 14:39 (HKT)
Virtua fighter, fighting vipers & more sega characters!
If you are a fan of sega, get this! Aside from the characters from fighting vipers and virtue fighters, there are many other sega characters included in this versus game! All characters are well balanced and the fighting mechanism from the various sega versus games blends well.
jahanzebkhan17 (45) on 25, May. 2011 09:20 (HKT)
Super Smash Bros SEGA
It's like smash bros but with a Sega twist! very modern fighting engine.
Creepy.Woody (15) on 04, Apr. 2011 16:00 (HKT)
Probably the best fighter available for the Saturn.
Fighters can come and go, but this one really sticks in mind because 1. It has fighting mechanics equally as good as any others on the system 2. It lets you play as a whole host of Sega characters; even the Hornet from Daytona USA and 3. No, I am not kidding about that last one. A must have for fighting or Sega fans!
everL (43) on 22, Dec. 2010 22:29 (HKT)
One of the best 3D fighters ever made
This is my personal favorite 3D fighter ever made. Cross-over between two classic Sega fighters; Fighting Vipers and Virtua Fighter.