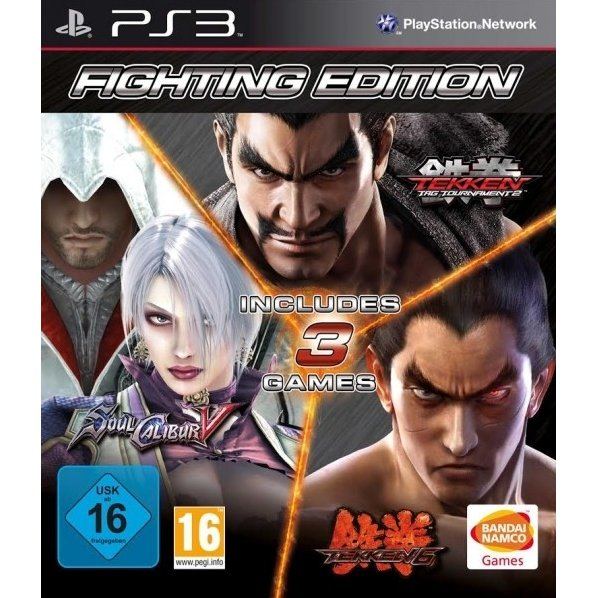 Bringing together 3 of the most famous fighting titles into one epic bundle, Bandai Namco proudly presents Fighting Edition: Tekken 6 / Tekken Tag Tournament 2 / SoulCalibur V to the west! This awesome compilation will be available for the PS3 console and will let gamers battle their way to the top as the strongest fighter ever! Packed with ground pounding action, enjoy these legendary games once more as each delivers exceptional fighting experience!

Tekken 6:
Boasting over 40 unique characters from across the series that represents the best martial arts style from around the world, battle your way to the top in this 7th installment to the successful Tekken series! Immerse in dynamic battles made rich in stunning HD graphics running flawlessly at 60fps along with a dynamic destructible environment that crumples in every attack. Finish your enemies with punishing move sets and deadly combos as you prove your supremacy against players in online VS mode or co-op AI battles!

Tekken Tag Tournament 2:
Experience once more the original tag team fighter that started it all! Featuring the largest roster of characters in the Tekken series, TTT2 makes players' dream matches come true with unlimited possibilities! Choose from over 50 fighters across the series and join in a ground pounding 1-on-1, 2-on-2, 1-on-2 battles or even in pair play that allows up to 4 players! Sporting 24 impressive maps, a wide variety of offline and online game modes, character customization features, new stages and other exciting gameplay innovations awaits all game enthusiasts in Tekken Tag Tournament 2!

SoulCalibur V:
This 6th installment to the famed weapon based fighting series follows the story of Patroklos, son of Sophitia as his family’s destiny intertwines with the Soul swords. Choose from the massive roster of customizable characters each having their own signature skills and forge your battles in exhilarating online and offline matches! Featuring guest character Ezio Auditore from Assassin's Creed to heat up the battle with his master assassin skills, engage in dynamic combat tuned to allow players to pull off impressive attacks and fighting styles!