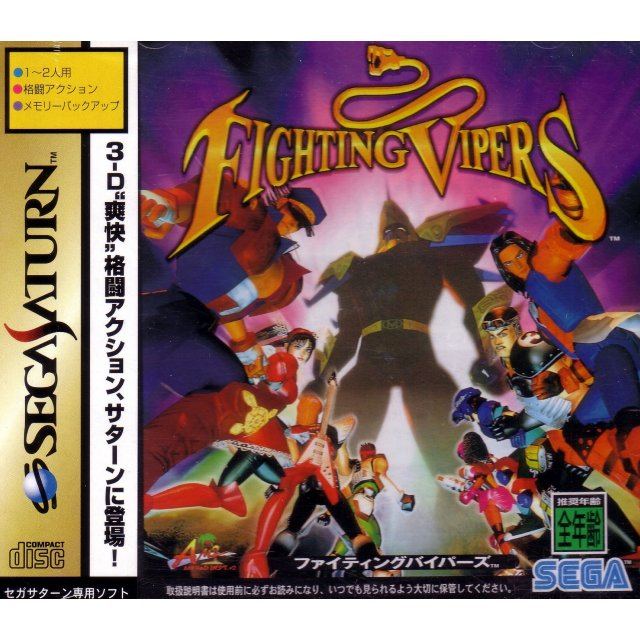 Sega
Rated
By Our Customers
Compatible with Sega Saturn™ (Saturn)
For JPN/Asian systems only.

If you are familiar with Fighting Vipers, why not let others know?

I ALMOST prefer Fighting Viper's to Fighter's Megamix, though the character roster in FMM gives it the upperhand.
jahanzebkhan17 (45) on 25, May. 2011 09:27 (HKT)
Surprisingly modern
it has live action replays, armour break, wall combos and wall parkour. Some cool rock music and character designs.
cesarrlobo (17) on 28, Apr. 2011 23:19 (HKT)
Fighiting Vipers
Solid (talk about an understatement) fighting game. Extremely recommended for those who liked Virtua Fighter but want a more "urban"/hardcore scenario with edgier characters.

Fighters are very balanced within themselves and possess very different styles - mastering them all adds a lot of replay value.

Training and other modes are a great plus for this game
Creepy.Woody (15) on 04, Apr. 2011 16:02 (HKT)
A great fighting game, but not the best on the system
Fighting Vipers is a good, balanced fighter and made as well as any other on the system. But because there are a lot more popular fighting franchises and mash ups on this system, it is easy to ignore this one. A must for fighting fans, forgettable for everyone else.
ujnhunter (75) on 13, Mar. 2011 03:05 (HKT)
Solid fighting game for the Saturn!
Just like Virtua Fighter & Fighters Megamix, it's a great 3d fighter to add to your Sega Saturn collection!
1 »