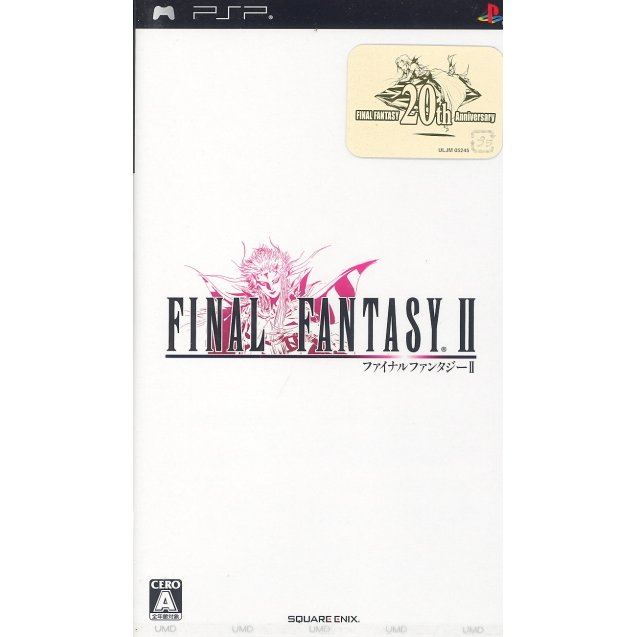 Originally released in 1987 in Japan, FINAL FANTASY® was hailed by gamers and critics alike as one of the first RPGs to create a fantasy world that captured the imagination of players around the globe. Twenty years later, the illustrious FINAL FANTASY franchise comes full circle: remastered as two separate titles exclusively for the PSP® system, FINAL FANTASY and FINAL FANTASY II are timeless classics that created the blueprints for the future of RPGs. These all-new 20th Anniversary editions are treated with crisp, updated graphics, an unforgettable enhanced soundtrack and a vibrant widescreen presentation.

In FINAL FANTASY II, a malevolent emperor has called upon monsters from a demonic realm to take over the world, ending what seemed to be an eternal period of peace. From the destruction rise four young survivors who will take it upon themselves to stop the merciless ruler and avenge the death of their parents.

If you are familiar with Final Fantasy II Anniversary Edition, why not let others know?

[This review is based on another version of this product]
docomogame (540) on 02, Apr. 2015 23:51 (HKT)
Great RPG
Beautiful graphic & good gameplay
jdmayor (1) on 09, Apr. 2014 02:28 (HKT)
5 stars
Bought this game a few months ago but forget to post my review. Excellet remake for psp. I decided to get my copy because I missed the original EU psp release and this japanese version includes english also. It couldn't be missed in my collection. =)
Thank you Playasia!
soulsync (60) on 29, Feb. 2008 14:28 (HKT)
Improved FF II @ Affordable Price ~
An affordably good game for PSP and great for collection as the game offers both Jap and Eng languages. Plus the discount offered by P-A is irresitable. Thanks again ~