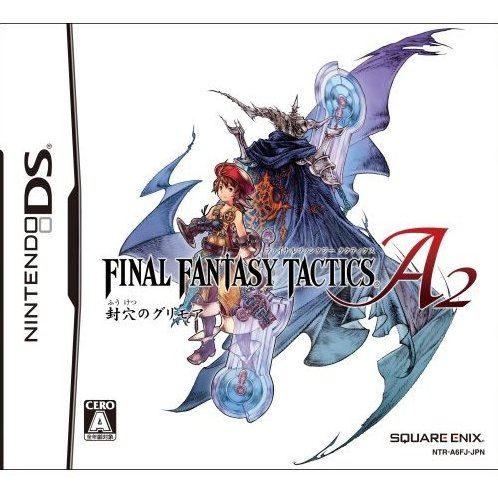 sold Out of print / Out of stock.
Manufacturer
Square Enix
Compatible With Nintendo DS™ (NDS™)
Version


Click on a thumbnail to see more pictures for Final Fantasy Tactics A2: Fuuketsu no Grimoire

Just like Final Fantasy Tactics Advance and Final Fantasy XII, Final Fantasy Tactics A2: Fuuketsu no Grimoir takes place in Ivalice. There are seven playable races in the game: Hume, Moogle, Viera, Bangaa, Seeq, Nu Mou and Gria. Chronologically, the game takes place some time after Final Fantasy XII.Similar to Final Fantasy Tactics Advance, Luso was a mischievous boy who lived in the real world until he was punished for a prank he pulled just before summer break. Locked away in the library, Luso finds an old book and writes his name on it. The book then transports him into the world of Ivalice. Rather than wishing to return home, Luso decides to venture the world farther. However, unlike in the previous installment, the main character travels to the real Ivalice, instead of a creation of his imagination born of strong feelings; this fact is reinforced by the reappearances of familiar characters such as Vaan and Penelo.

If you are familiar with Final Fantasy Tactics A2: Fuuketsu no Grimoire, why not let others know?

PuNiao (365) on 20, Jul. 2008 19:33 (HKT)
Final Fantasy Tactics A2: Fuuketsu no Grimoire
Final Fantasy Tactics Advance 2 is the kind of clashing swords, flashing magic game that appeals to many. The game stars Luso Clemens, a school kid who's been magically transported to the world of Ivalice. While finding his way out, he gains friends and enemies and partakes in some 400 quests. Final Fantasy Tactics Advance 2's heart lies in its combination of characters and races. With some 56 classes spread out over seven races, it takes hundreds of hours to unlock them all. The intricacies of learning how to mix the skills from different classes - such as combing the fast speed of a ninja with the devastating magical attacks of a black mage - is part of the fun and the challenge. Pulling it together is a beautiful, engaging world that captures the attention of its target audience - children - perfectly. My younger cousin refused to return the game after I let her play it for a few hours. Other positives include fairer judges whose rules must be obeyed in battle. In the previous game, breaking rules meant being thrown in jail. Here, it only means fewer items gained after a battle and the inability to revive friends during the fight. Almost all the equipment that the classes need must first be unlocked by trading looted items at the bazaar before they become available for purchase. Also, the game's fixed camera, combined with its lush backgrounds, can sometimes serve to hinder rather than help players who want a good view of the battle. Don't bother with the stylus controls, using the directional buttons is much faster and more intuitive. If you can get over the hurdles, Final Fantasy Tactics Advance 2 makes an excellent time-waster.
nadavrt (9) on 15, Jul. 2008 18:54 (HKT)
Better Then Ever
This game spawns the best graphic yet for the DS. The look and feel of the magic spells is stunning. More then 20 new jobs were added to the jobs you could use in the last game, 2 new classes were added: the pig-like seeq and the succubus-like garia. The missions are also more diverse and there are stealth, escort, investigation and survivale mission as opposed to last game's "battle every single mission" system. 400 such missions makes the game very long and rich. The game also makes great use of the dual screens and has a nice soundtrack which is basiclly a remix version of FFTA music and FF12 music.
The only 2 shortcomings of the game are the bad controlls with the stylus (you'll prefer to play it with the buttons instead) and the lack of plot. which is almost none existent. All in all one of the best games ever to come out for the DS systems.
Tuluwen (2) on 08, Nov. 2007 12:00 (HKT)
No title
I\'m a long time Final Fantasy fan, and this game does not disappoint! One odd thing: I pre-ordered this item and when I got it, included in the package was a DS pouch themed with the Bleach character Kon - I was pleasantly surprised, but I\'m still curious whether it was because I pre-ordered, or if play-asia ships it with this game.