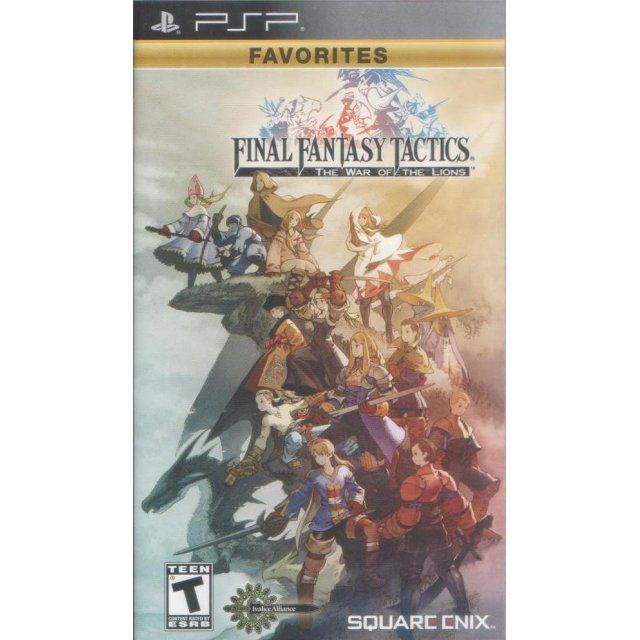 
Click on a thumbnail to see more pictures for Final Fantasy Tactics: The War of the Lions (Favorites)

Originally released in 1998 on the PlayStation® game console, FINAL FANTASY TACTICS, the first tactical RPG in the legendary FINAL FANTASY® series, enthralled fans around the world with its unique artistic style and intricate storyline. Shipping more than 1.1 million copies in North America, FINAL FANTASY TACTICS opened the genre to legions of new fans.FINAL FANTASY TACTICS: THE WAR OF THE LIONS, reborn and enhanced exclusively for the PSP system, introduces never-before-seen cinematic sequences, an entirely new English translation, 16:9 widescreen presentation and multiplayer features that will reintroduce this classic to a new generation of gamers.

If you are familiar with Final Fantasy Tactics: The War of the Lions (Favorites), why not let others know?

matti (3) on 28, Feb. 2014 20:11 (HKT)
Good story and fun gameplay
This game is a slightly enhanced version of an old PSOne classic. They added cutscence and improved the localisation. Unfortunately there are now slowdowns during battle (don't worry, could be worse).
Ideal game for a portable console. I also would like to recommend 'Tactics Ogre: Let Us Cling Together' for those who like these kind of games. Many say it's even better than Tactics.
hakimin_hakimin (1) on 06, Jan. 2013 09:46 (HKT)
Best tactical game
It is so addictive, I cant stop playing at all. The best tactical game ive ever play
returner (227) on 25, Dec. 2012 23:57 (HKT)
one of the best tactic rpg now on psp
The best tactic rpg !!!! Classic ps one now on psp...with extra quesr,character and cutscene make this fft war of the lion must have
cesarrlobo (17) on 21, Dec. 2012 07:32 (HKT)
Great game
It keeps pretty much the basic stuff the made the first version so enjoyable and adds a few tweaks like more characters in your party. Sound a bit worse though
murilo_othonicar (25) on 18, Dec. 2012 07:12 (HKT)
Good game.
A excelent strategy RPG, and a good Remake of the psx game.
1 »