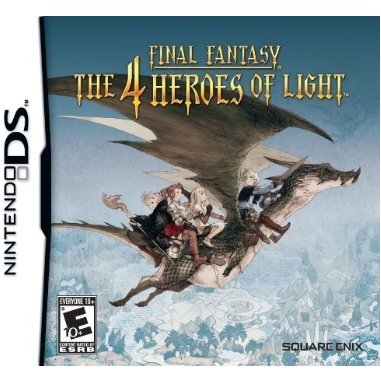 Works on all systems sold worldwide, a correct regional account may be required for online features.
24h In stock, usually ships within 24hrs.
US$42.99
Limited time offer - Secure yours now before the offer expires!
Square Enix
Rated By Our Customers
Compatible With Nintendo DS™ (NDS™)
Version

Works on all systems sold worldwide, a correct regional account may be required for online features.
24h In stock, usually ships within 24hrs
Price
US$42.99
Limited time offer - Secure yours now before the offer expires!
Play-Asia.com Return & Refund Policy
Click on a thumbnail to see more pictures for Final Fantasy: The 4 Heroes of Light

timey84 (134) on 17, May. 2017 10:43 (HKT)
simple, fun and FF
Played it before the releasement of bravely default series, the artwork is similar and char too! Totally fun and easy Crown job system.
kopokopu2 (4) on 04, Apr. 2017 04:29 (HKT)
If you want something old school, this is for you.
The plot is simple as it was aiming for the old school feel. The battle system seem simple at first, but in that simplicity it could make the game quite hard during earlier hours, especially when you have no access to jobs, being called crowns in this game. Unlike other RPG you can't run away from battle from the get go. You need to earn that ability, so expect to die a lot until you can learn "escape".