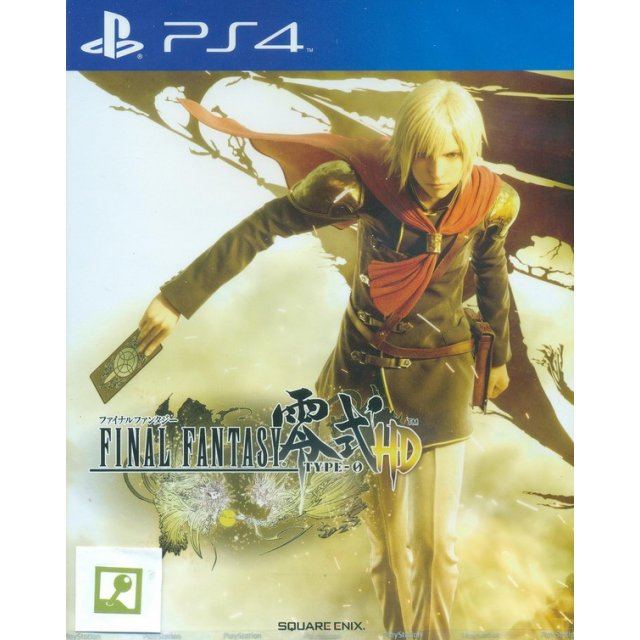 Works on all systems sold worldwide, a correct regional account may be required for online features.
24h In stock, usually ships within 24hrs.
US$5.99
Limited time offer - Secure yours now before the offer expires!

Works on all systems sold worldwide, a correct regional account may be required for online features.
24h In stock, usually ships within 24hrs
Price
US$5.99
Our previous price:
US$ 67.99
You save:
US$ 62.00( 91% )
Play-Asia.com Return & Refund Policy
Click on a thumbnail to see more pictures for Final Fantasy Type-0 HD (Japanese)

In the first week after it's Japanese only release, Final Fantasy Type-0 for the PSP enjoyed phenomenal success; by the end of the year, it outsold Monster Hunter Portable 3rd (PSP), Final Fantasy XIII-2 (PS3), and even Dissidia 012 Final Fantasy, making it the best selling PSP title of 2011.

With near-perfect scores from Famitsu (39 out of 40) and Dengeki Magazine (91.25 out of 100), this was the game that all Final Fantasy fans needed, but only those with import inclinations and the ability to read Japanese could access.

Now, after a long time of waiting, pleading, and begging to Square Enix, our patience has been rewarded with an HD Version of the game that got away.

The biggest news of all though is that each and every copy of Final Fantasy Type-0 HD has been officially confirmed to include a demo voucher of the highly anticipated Final Fantasy XV!

This demo version is dubbed FINAL FANTASY XV –EPISODE DUSCAE- which will be especially rearranged and edited to contain a part of the opening scene from the game.

For all Final Fantasy fans, this is indeed one of those moments that define a console generation - from FFVII to FFX, this combination of both games is something to look forward to!

If you are familiar with Final Fantasy Type-0 HD (Japanese), why not let others know?

Cons:
-No attempt to integrate gameplay and story, whenever something happens your control is almost immediately taken away and a cutscene (often multiple) begin.
-The English acting is a bit cheesy, haven't heard the Japanese
-The High School/Academy setting that Japan is addicted to for some unknown reason

If you fancy yourself an otaku and want some hack-and-slash action with light RPG elements this game is right up your alley. If not then it's a hard sell.
-
[This review is based on another version of this product]
Hayato01 (503) on 19, Apr. 2015 11:41 (HKT)
Great FF port
Really enjoyed the game, if you know how the Final Fantasy games are like, this one must have the darkest opening, and also one of the saddest conclusion. The demo for the FFXV was just breath taking.
[This review is based on another version of this product]
e_pedraza_g (517) on 10, Apr. 2015 08:13 (HKT)
Amazing looking game... on psp, that is
Looks like crap on current gen consoles, but plays amazingly well. So if you are not put-off by crappy graphics you will be in for a treat