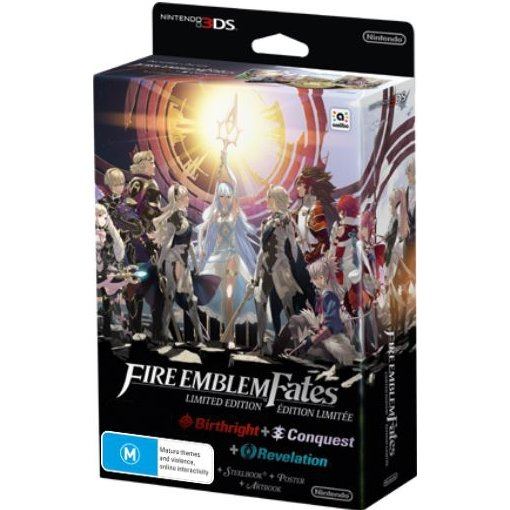 If you are familiar with Fire Emblem Fates (Special Edition), why not let others know?

[This review is based on another version of this product]
Raymustang (4) on 18, Feb. 2017 11:46 (HKT)
Pedestrian at best
Mechanically there's nothing wrong with this game, but the story is painfully flat and the game's attempts to sell you it's 2 other paths makes it feel like a used car salesman has started dressing in Fire Emblem's clothing. Wait for a discount if like me you're a fire Emblem maniac.
[This review is based on another version of this product]
rongman (13) on 12, Jun. 2016 05:43 (HKT)
Great followup to Fire Emblem Awakenings
If you liked Fire Emblem: Awakenings, you'll most likely like this game. I feel that the story is a bit weaker, but the gameplay is better and combat is much improved. As a Fire Emblem fan or a strategy rpg fan in general, you can't go wrong with this game.
win_xp_user (19) on 11, Jun. 2016 15:13 (HKT)
3 in 1 that is a must
Dividing story arc actually seems to be a bad idea but at least Nintendo of Europe is willing to make up this mistake. Though pricey, it does deliver well for a cartridge version, even Japan doesn't have 2 in 1 (since Revelation came out later). Plus with the poster, steelbook and artbook, the value seems to be justified for a collector edition. No wonder it sells well