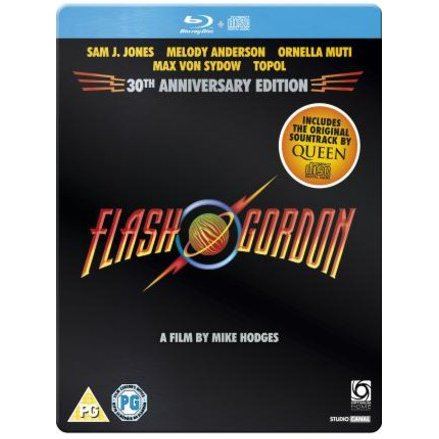 sold Out of print / Out of stock.
Please take note that, once purchased, this item must be paid immediately and cannot be cancelled or returned.
Feature
Max von Sydow, Sam J. Jones, Melody Anderson, Ornella Muti, Topol, Timothy Dalton
Version

UK Blu-Ray/Region All limited Steelbook pressing. Includes the original soundtrack by Queen on CD! Featuring an all-star cast and a much-celebrated soundtrack by Queen, this is the original and best version of the sci-fi classic Flash Gordon, based on the comic books by Alex Raymond and Don Moore. Spawning Saturday morning serials, animated cartoons, a recent live action series on Sky, the story is once again going to be remade for the big screen in the near future. Meanwhile, you can enjoy this gloriously camp version in lurid Technicolor. Flash (Sam J Jones) is a football hero skyjacked aboard Dr Zarkov's (Topol) spaceship along with the beautiful Dale Arden (Melody Anderson). The threesome is drawn into the influence of the planet Mongo where they encounter Ming the Merciless (Max Von Sydow) and together must foil his plot to destroy Earth. * Please note the artwork is printed as Region B but the main feature is viewable on all US BR and PS3 players. The supplemental features are not viewable however.Later the Ching Wu school comes under a massive attack by Nin Mu's henchmen for revenge. While Chen's colleagues Chen-hsia and Li-erh (Nora Miao) are boiling with anger, the Japanese Consul arrives with a chief police detective. It is understood that the school will be held responsible for Nin Mu's death, if Chen fails to give himself up. Another clash looks imminent, Chen makes his surprise appearance.

No reviews for Flash Gordon: 30th Anniversary Edition: Steelbook yet.