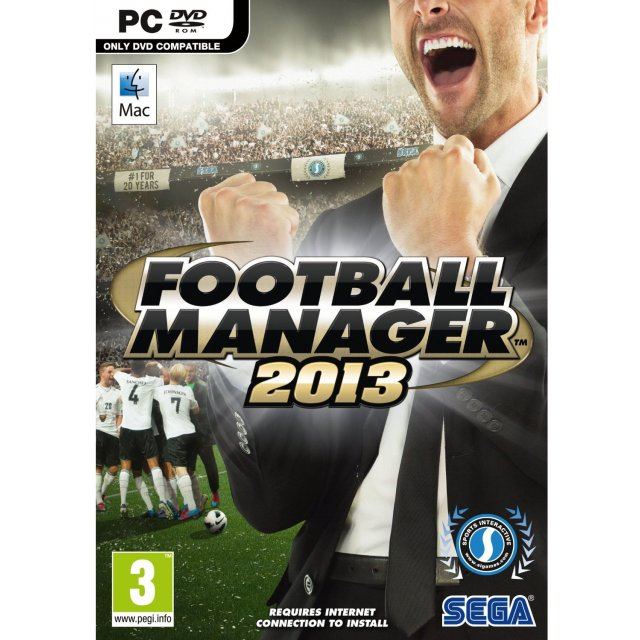 sold Out of print / Out of stock.
Manufacturer
Sega
Compatible With Windows™, Mac™
Version

Football Manager is the best-selling, most realistic football management series ever made. Football Manager 2013 celebrates 20 years of games from the people at Sports Interactive by introducing an array of new features.

This year's version allows you to take control of any club in more than 50 nations across the world and includes all of Europe's biggest leagues as well as database of over 500,000 real-world players and staff.

As well as some landmark new features in the Career Mode, there are now new ways to enjoy your Football Manager experience.

Match Engine
The 3D match engine has seen huge improvements this year. Everything on the pitch looks more realistic from the stadiums, the players' movement, intelligence, and the way the ball moves through the air. We've also introduced hundreds of new animations to make the game feel more realistic and we've made the whole experience more televisual by introducing new camera angles and showing the kick-off and final whistle.

Manager Roles
Another notable difference is the significant restructure of the manager's staff and a revamp of their roles. The most obvious is that we've introduced the position of Director of Football into the game for the first time, which will allow managers to pass on some of their workload, such as contract negotiations, if they choose to.

In addition to this, we've also increased the number of specialist coaching roles within the game and given the manager greater flexibility to choose which coaches offer advice and when. The manager can also choose to complain about boardroom interference - although that particular option should probably be used sparingly.

Classic and Challenge Modes
Football Manager Classic is a less time-consuming way to enjoy Football Manager. The essence of the game is exactly the same - the manager still takes charge of a squad of players and competes at whatever level he or she chooses - but they will now find that a number of their responsibilities have either been taken over by their support staff or have disappeared completely.

For example, while the player still takes charge of training in FMC, this is carried out at a 'full team' level only - there's no individual player training. And when it gets to matches themselves, there are no team talks or opposition reports... you just go straight to a game using the same 3D match engine as Career Mode. The games are played out in a quicker 'highlights only' fashion, but you can even speed this up by going straight to 'Instant Result'.

In Challenge mode they'll find themselves in a particular situation which will test their management skills over a shorter game time - usually half a season. Can you win a trophy with a team consisting almost entirely of kids? Or could you guide your club to safety despite being bottom of the table at Xmas?

We first introduced Challenge Mode in Football Manager Handheld 2012 and it proved to be so popular that we've decided to include it in FMC too.

The game will come with four free-to-play challenges, each of which feeds in to a global leaderboard.

Network Play
The brand new Network Play is fully integrated with Steam's network functionality which means that players should be able to set up and enjoy games against their friends far more easily than before. The Network Mode also allows people to set-up special one-off leagues and cups and to import their team from their career mode, so you can now end any debate about whose FM team is better.

The deeper integration with Steam will also allow us to manage worldwide leaderboards, so, for the first time you'll really know how good a manager you are.

If you are familiar with Football Manager 2013 (DVD-ROM), why not let others know?