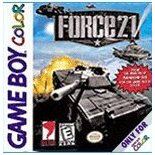 The year is 2015 and World War III is about to begin. Recent advances in "Star Wars" technology have removed the threat of global nuclear conflict and reopened the option of conventional war between great powers.While the fragments of the Soviet Union continue their slide into economic and social chaos, free-market China has become the preeminent power in the Far East. Desperate for natural resources to sustain its economic boom, Beijing invades the central Asian republic of Kazakhstan, drawing both Russia and the United States into a bitter struggle that ultimately will determine who will rule the world in the 21st century.Force 21 for Game Boy Color is the first of its kind to reach the handheld platform. In this real-time tactical (RTT) game, the player must choose which nation to defend, China or the U.S., as an elite Armored Platoon Commander. The game follows the previously released PC version in story line, missions, and vehicles but reorganizes the complexities of the title aiming for a more arcade-like theme for the game. WWIII is in the palm of your hand. Choose sides.

No reviews for Force 21 yet.