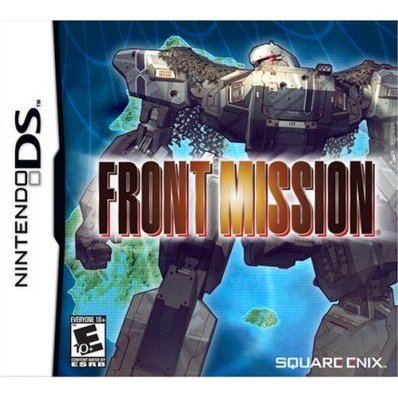 Originally released for the Super NES in 1995, Front Mission wowed dedicated strategizers with its engrossing turn-based mech campaigns, extensive customization options and serpentine tales of global conflict. At long last, Square-Enix is extensively remaking this classic for the North American audience!Discover the origins of the Front Mission series in this explosive handheld saga that was never before localized for North America. Reborn exclusively on the Nintendo DS, Front Mission introduces exciting new features, such as dual screen presentation and multiplayer modes, that update the classic that spawned seven popular sequels. Using Touch Screen functionality, you command a squad of customizable mechs known as Wanzers and direct them through the turn-based battlefields of the 21st century.

If you are familiar with Front Mission, why not let others know?

savio.a (40) on 09, Apr. 2011 01:39 (HKT)
Great remake!
A great remake of the original game for the Super Nes! I wanted it so badly when it came out 15 years ago and now it got a Western release...! Get it!
gundamalpha (181) on 23, Feb. 2011 11:46 (HKT)
My fourth FM1, 1st in English language
It only tells you how much I love this game, and it's a game that deserves so much love. The story, characters, system never gets old, buy it if you like strategy games.
TAS (112) on 17, Feb. 2011 13:25 (HKT)
Essential.
After struggling through the original Japanese SNES version all those years ago, it's an absolute treat to rediscover this gem of a game and finally pick up all the nuances that I had no choice but to gloss over first time around.
Yes, it's a 15 or so year old game and it's definitely show's it age, but it's also a bona-fide classic that spawned some pretty great sequels and deserves to be viewed as such. Essential DS gaming...
sushi_b (58) on 09, Dec. 2010 22:09 (HKT)
No real experience with the game series prior to this.
I have a copy of Front Mission 4 on the PS2 which I managed to play for a little bit before putting it down. I can't remember anything really about it but it seemed interesting.

Flash forward to now and I have taken another dip with the series with this DS remake of the SNES original. Having no official English release of the game, this is a pretty big deal for some people, including me. FM has been pretty highly regarded, yet never had a chance to shine outside of Japan.

The game is pretty interesting as a while. It's got a variety of little technical aspects for each mech in the game. They have long range tactics as well as close weapons or physical attacks. This causes a lot of challenge and takes some serious planning in order to finish a level. The story seems to play out slowly so it takes some time to get into it, but battles are the main focus and they are really good if you like strategy and planning.
shadowmane4 (9) on 24, Oct. 2010 12:40 (HKT)
Front Mission is awesome
Never had the snes version just the rom version. Front Mission is also the reason why I got Front Mission 3 and Front Mission Evolved. It is a great game even if is originally a snes game. Front Mission has a very good, in depth story, that I´m only begining to just scrap the surface. I hope to see English translations of Front Mission 2, Front Mission 4, Front Mission 5: Scars of War, Front Mission Alternative and Front Mission History. I recommend this game. To me it was a great buy.
1 »