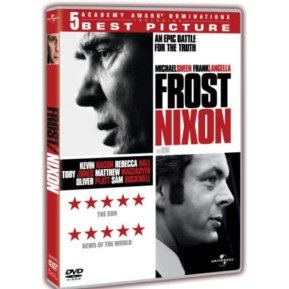 From Academy Award-winning director Ron Howard comes the electrifying, untold story behind one of the most unforgettable moments in history.When disgraced President Richard Nixon agreed to an interview with jet-setting television personality, David Frost, he thought he'd found the key to saving his tarnished legacy. But, with a name to make and a reputation to overcome, Frost became one of Nixon's most formidable adversaries and engaged the leader in a charged battle of wits that changed the face of politics forever.Featuring brilliant portrayals by Frank Langella and Michael Sheen, Frost/Nixon is the fascinating and suspenseful story of truth, accountability, secrets and lies.

No reviews for Frost Nixon yet.