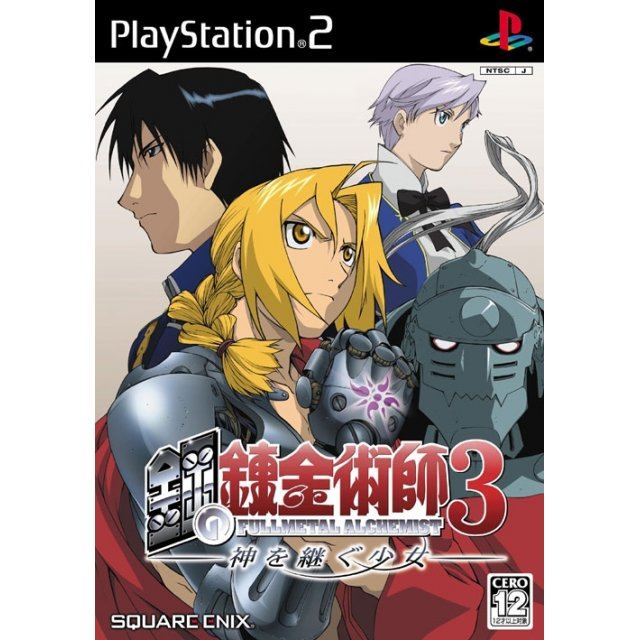 Based on the popular Japanese TV anime series (Fullmetal Alchemist, also known as Hagaren), Square-Enix's action RPG PlayStation2™ series goes into the third round. This time you will encounter an original story taking place in a metropolis called Valdora, exclusively written for the game and not previously seen in any anime.You will control Alphonse Eric and his older brother Edward, getting rid of all sorts of baddies using your standard as well as Fullmetal alike magical attacks. New in this series is a split screen cooperative mode, which allows two players to play at the same time. During single play you can change characters between Alphonse Eric and Edward resulting into a different story flow.大ヒットアニメを原作とする、プレイステーション2のアクションRPG『鋼の錬金術師』シリーズに第3弾が登場！本作では、従来のエドに加えて、新たにアルの操作が可能に！プレイヤーは、使用キャラクターをゲーム中で自由に切り換えながら、オリジナルの新作ストーリーが体験できます！

If you are familiar with Fullmetal Alchemist 3: Kami o Tsugu Shoujo, why not let others know?

Cygnus no Hyoga (3) on 22, Jul. 2005 22:27 (HKT)
Simply the best
Well this game has improved a long way since its 2 predecesors, now with a cooperative mode and a few new features, Fullmetal Alchemist 3 has become the best version ever delivering more action, well double the action if you will, An awesome adition to the trilogy, will highly recommend it.