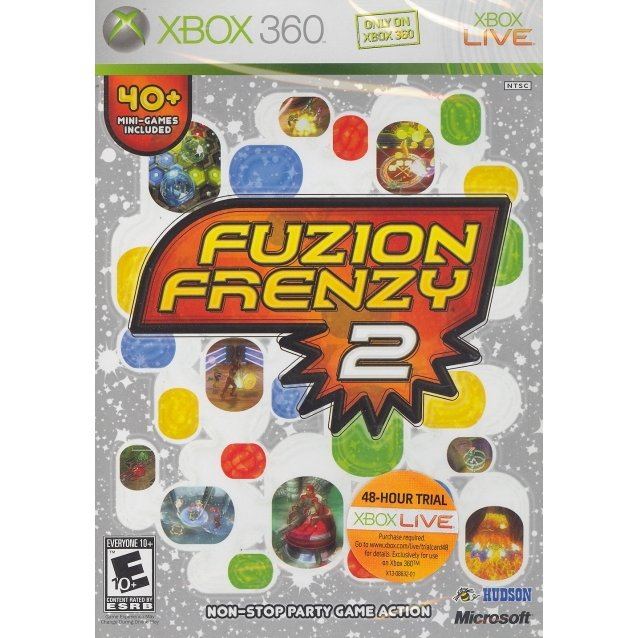 Works on all systems sold worldwide, a correct regional account may be required for online features.
1w Expected stock arrival within 1 week.
US$24.99
Our previous price:US$ 49.90
You save: US$ 24.91( 50% )
Manufacturer
Microsoft
Rated By Our Customers
1w Expected stock arrival within 1 week
Price
US$24.99
Our previous price:
US$ 49.90
You save:
US$ 24.91( 50% )
Play-Asia.com Return & Refund Policy
Trustpilot
Trustpilot
Click on a thumbnail to see more pictures for Fuzion Frenzy 2

It's your turn to appear on the intergalactic TV sensation, Fuzion Frenzy! In Fuzion Frenzy 2, you play for huge prize money and a chance to save your planet. Compete in 40 different mini-games on seven different planets, from sports challenges to thrilling battles, on your way to becoming the ultimate victor.

[This review is based on another version of this product]
inaka_rob (196) on 20, Oct. 2011 07:30 (HKT)
terrible game
granted there are not many "party games" on xbox 360, but this game is probably a good reason why. Unless you are a little kid or maybe you and your friends are so drunk you don't really care whats going on in this game, I suppose it could be fun.
Either play a million other games online or buy a Wii if you HAVE to have 4 player action at home.
[This review is based on another version of this product]
PuNiao (365) on 30, Apr. 2007 12:49 (HKT)
Fuzion Frenzy 2
Traditionally, the \"party\" genre of video games referred to computerised versions of your childhood conpendium games like Snakes and Ladders, suitable for when friends and family visit. Today, while the purpose remains unchanged, the genre is more associated with multiplayer mini-game collections. These games get you to do everything froom shooting baskets and navigating obstacles courses to stuffing fingers up random strangers\' noses - by pressing buttons on a controller, of course. This shift in perception can be largely attributed to 1999\'s Mario Party, whose claim to fame, the numerous mini-games inbued within the primary premise of Snakes and Ladders - were so well-received that thet re-defined the entire genre. Pleased with its success, developer Hudson Soft and publisher Nintendo went on to make more Mario Prty titles.

The secret ingredient that kept me coming back for more was the one thing Microsoft offers that Nintendo currently does not - online play. Of course, a party game is best enjoyed with pals in the house and a can of beer in hand. But in the absence of such great company, slugging it out against random strangers online is a hassle-free second best. This practicality alone makes Fuzion Frenzy 2, an otherwise lacklustre entry, a worthwhile consideration.
[This review is based on another version of this product]
yucca (101) on 02, Mar. 2007 02:14 (HKT)
Thank you
Good game. Good and fast delivery.