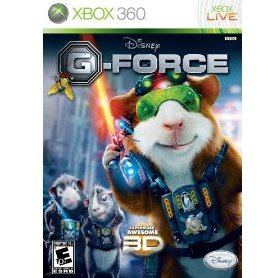 Works on all systems sold worldwide, a correct regional account may be required for online features.
1w Expected stock arrival within 1 week.
US$62.99
Manufacturer
Disney Interactive
Rated By Our Customers
1w Expected stock arrival within 1 week
Price
US$62.99
Play-Asia.com Return & Refund Policy
Click on a thumbnail to see more pictures for G-Force

The G-Force, a group of highly-trained covert guinea pig spy agents, is the only team that can save the world from an evil billionaire and his army of robot appliances.G-Force the video game is an exciting action-platformer that puts you in control of Darwin, the G-force team leader, and his housefly surveillance sidekick Mooch. Use awesome high-tech gadgets and stealth strategy as you team up with the other G-Force agents to complete your exciting mission.

If you are familiar with G-Force, why not let others know?

brianwong15 (9) on 23, Dec. 2012 22:01 (HKT)
G force!
Very funny! Must buy item!
Selkirk16 (126) on 15, Aug. 2012 08:52 (HKT)
G for Great!
Great fun for kids and adults. Comes with free 3D glasses to add more enjoyment to the game for you!
Selkirk16 (126) on 18, Jul. 2011 16:05 (HKT)
Squeakingly Fun
A surprisingly deep and engaging game for adults and kids alike. If you liked the movie, you'll love this fun game as well!
beelzebubble (9) on 02, Mar. 2011 08:23 (HKT)
Don't be fooled by the kiddy exterior, adult fun to be had too!
I was pleasantly surprised by this game. Despite the reviews that I had read saying it was deeper and more entertaining than your average game aimed at kids, I didn't expect much. I was wrong. As the main character from the movie you have a pretty extensive arsenal and there are lots of gameplay mechanics you have to master if you are going to make it through this one.

The look of the game is very close to that of the movie, a good thing considering that this is a game based on a movie. Still the graphics do have a last gen or a "first year of the 360" look to them. Not bad, just clearly inferior to recent graphical powerhouses. Still it's nice and colorful and sure to keep any kids who play it happy.

The gameplay is pretty deep in this one, much more so than I expected. You are going to learn a lot of different ways to use your abilities and weapons, not to mention having to switch between two characters. Later on in the game you might find yourself scratching your head at what you need to do next or getting overwhelmed with the multitude of different ways you have to use your abilities just in one short section of gameplay. None of this is a real problem though as the game controls really well and you have a reasonable amount of freedom in how you approach each obstacle.

If you can get this one cheap and you are in for some platforming/adventure/action then give this one a try.
colinjtaylor (83) on 18, Jan. 2011 10:33 (HKT)
Great Game For Kids
definitely worth the price
1 »