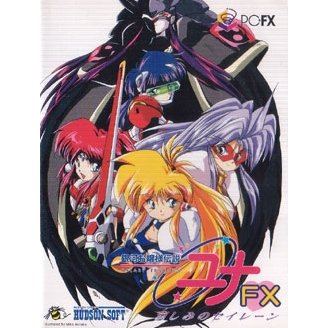 sold Out of print / Out of stock.
Manufacturer
Hudson
Compatible With PC-FX™ (PCFX)
Version

The third game in the Galaxy Fräulein Yuna series, Kanashimi no Sirene picks up where the last game ended. After having successfully saved the Earth, Yuna and her new friend, the ever-hungry female android Yuri Cube, return to their normal high school life - or so they think. Because her old enemies will do anything to destroy her, including wrongly accusing her of world domination plans. This draws the attention of a highly ranked female intelligence officer of the Galaxy Alliance, who operated under codename "Sirene" and who pretends to be an exchange student in the Shiraokadai High School, while her true goal is to arrest Yuna...

Kanashimi no Sirene plays similarly to the other games in the series, with the main gameplay consisting of being taken automatically to different screen and making dialogue choices. There are also turn-based battles, during which the player has to choose the right attacks at the right time to defeat the opponents. There are also a few mini-games that appear during the course of the game, such as a quiz show and a slot machine-type game with the purpose of getting new clothes for Yuna. There is an extensive "Extras" menu in the game, which features character album, graphical sketches, photos of various material connected to the series (such as magazines or covers of previous games) etc.

No reviews for Galaxy Fraeulein Yuna FX yet.