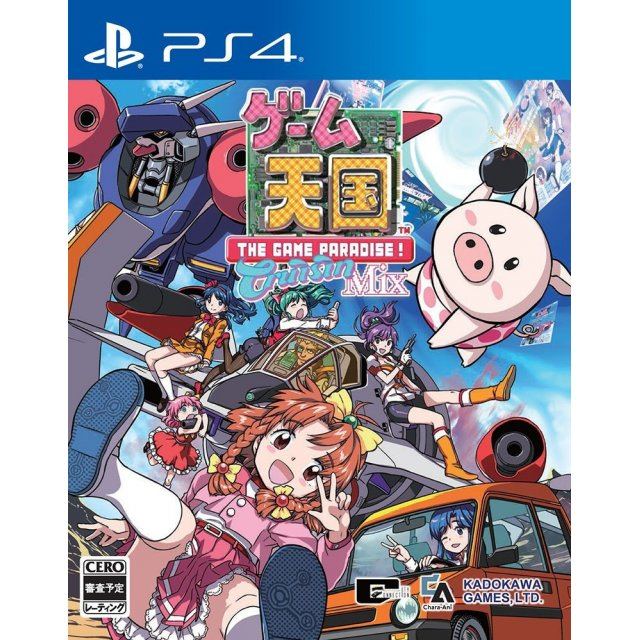 Kadokawa Games
Rated
By Our Customers
Compatible with PlayStation 4™ (PS4™)

Following the hit arcade title released in 1995, Game Tengoku hit the Sega Saturn in 1997. It featured classic Jaleco characters mixed in with all-new original characters voiced by a number of popular voice actors, and was a character-based shoot ‘em up that was well ahead of its time!

It also featured characters designed by famous manga artist Tatsuya Souma, plus fully-voiced skits, 4 original songs, and animations! All while making other shooting games jealous of how well it pulled off its game mechanics! It managed to be a character centric game without succumbing to any of the cut corners that usually come with such a title.

To this very day countless fans still call for a remade port of this title!

If you are familiar with Game Paradise Cruisin Mix, why not let others know?

rkassardjian90 (5) on 02, Sep. 2019 16:59 (HKT)
It's a great game.
Unfortunately, I do not like the fact that the DLC character was not downloadable on my American console especially when the character themselves are on the cover of the game so it's a real piss off that I cannot use her. I love the game and the collection but seriously, why couldn't you put those characters in the game initially? It's a damn shmup! Don't ruin these games especially when the character is on the damn cover but is completely separate from the game...that is a huge NO-NO in my book and so should every one else's.
outerheaven (138) on 11, Jan. 2019 12:23 (HKT)
Stunning physical copy shmup!
Totally worth it! Physical copy of an awesome shmup classic. Now in HD remastered graphics
jroberts503 (1) on 29, Aug. 2018 08:19 (HKT)
A real game
This is a real arcade style game but with unique Japanese undertones. This game is actually on the PS4 store in the US but it's not a paradise version. It's just called Crusin mix. No Paradise like this one, I don't know if there is a difference. This is the only opportunity for physical copy thus a no brainer.
ricardo.hurtado (10) on 21, Feb. 2018 09:31 (HKT)
First maniac shump in the world!
Great game! must have!
e_pedraza_g (517) on 09, Feb. 2018 14:46 (HKT)
Old school compilation!!!
Anime on DVD is a nice extra!!!
1 »