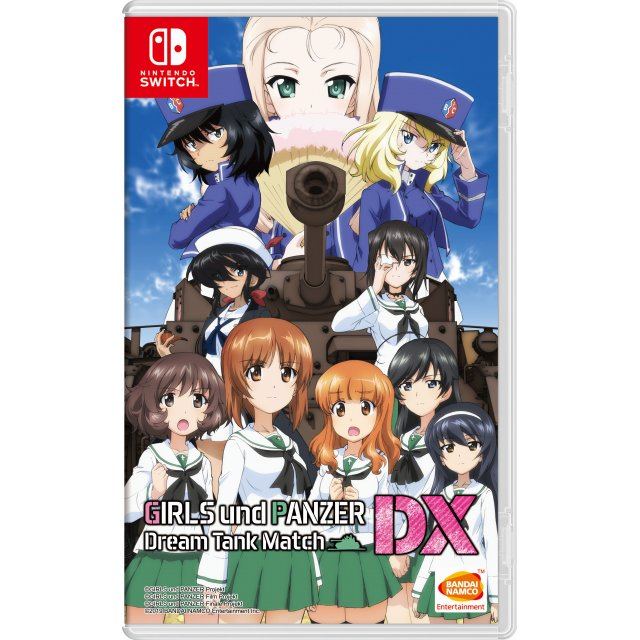 This is your very own Panzerfahren.

Maneuver tanks with the realism and exhilaration of GIRLS und PANZER, with the addition of online multiplayer matches for up to 10 players. Single player mode is rich with original story modes: re-live the movie storyline from different characters' perspectives in Story Battle mode or play as the Rival School team in Domination Battle mode, and more. Users will experience true Panzerfahren that is characteristic of the game.

- There are 3 languages: English, Korean, Traditional Chinese
- Upon starting the game, the user will be prompt to read Terms and Conditions in any of the 3 languages
- If you want the game in English, you have to read the terms and conditions in English, same as through if you choose Korean/Chinese
- If the user wants to change the language, it needs to delete all save files, restart the game and the T&Cs setting will prompt again

If you are familiar with Girls und Panzer: Dream Tank Match DX (Multi-Language), why not let others know?

xxdeadpeacexx2000 (13) on 19, Dec. 2019 13:45 (HKT)
Come and try this Panzer High
Ultimately, Girls und Panzer: Dream Tank Match isnt the perfect primer for Girls und Panzer, nor could anyone expect it to dethrone contemporaryporary tank sims, but taken on its own merits, it's a solidly-built, roundly enjoyable foray into the fun-loving world of Girls und Panzer, delivering a ton of fan service and some engaging combat on top.
Imation (447) on 02, Sep. 2019 09:23 (HKT)
ideal to fans
The final edition of this saga comes to Nintendo Switch, it contains some extras that do not include them in Vita and PS4, but the rest of the game is identical, it is also the fully playable English version!
bobob4477 (1) on 21, Jun. 2019 15:17 (HKT)
Great fun even if a little expensive
Story-mode takes place just after the movie with the student council gathering all involved to recap and so you go through certain parts of the movie where you take control of the characters involved and take part in a loose version of what happened. For instance these could be destroy a certain amount of enemy tanks, such as the OY defensive point in the exhibition match and there's also arrive at a certain destination, such as the rainy retreat in the main battle. Some are extremely short (like seriously, around 30 seconds) and some around 5 minutes, but it's cute and fun. If it were just this the game would be grossly overpriced, luckily there are heaps of other game modes. There is an online mode, bonus missions which include the battles from the series, some interesting matchups (the Maus v 5 CV-33s is actually pretty hard), and in this version some missions involving BC Freedom. You can also play a "panzerfahren festival" where you select any 2 tanks and commanders, and as you defeat other teams you pick one to fight with you with an eventual 5v5 battle, after which you fight Ami Chono in her type 10 and get absolutely destroyed... My favourite is the Domination Battle where there is a very loose story and scenes between battles but mainly you have to win 5 straight randomly drawn battles as your chosen school. The story is that some random Arab oil magnate has put up some "amazing prize" and naturally it turns out that whatever everyone was hoping for, it isn't that. The battles can be on any map, against any other school, and be any kind of battle. Some of these can last 30 seconds or around 5 minutes.

So the game has ups and downs, but if you're a fan like I obviously am, it's worth it I say. Very fun.
Blackbishop (2) on 10, Apr. 2019 07:27 (HKT)
Cute game
I really haven't watched the series which inspired this game, at least not the chapters they talk about so I went blind, but I find the game cute.

I have watched a review of the PS4 title where the reviewer complained about the story scenes being unskippable and long, but so far every cutscene I have tried so far can be skipped in this Switch version. Also, it seems to have several new crews, missions, and maps along with new (free) DLC.

If you haven't purchased the PS4 version(or even if you did and still want it) this is a good choice to spend some time because I find this game a bit relaxing(except for that mission with the Crusader tank... oof).
jmlemond005 (1) on 30, Mar. 2019 09:21 (HKT)
Huge fan of GuP
Got package while it arrived and this game look amazing like anime and of course cover art was cute :D
1 »