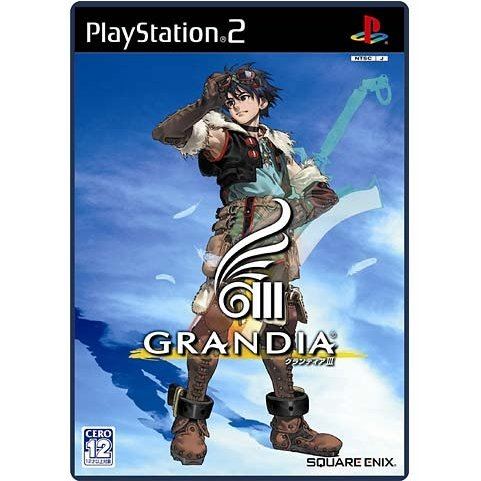 The Grandia RPG series finally receives a sequel. For the first time ever, the game play (including the map design) is presented fully in 3D, resulting in more beautiful and delicate graphical performance. In addition, new systems and the spectacular aerial combo as well as many new elements that many fans of the series will like have been included.The "Ultimate Action Battle" system from the first of the series has evolved into a new breakthrough system. You will experience counterattacks, cooperation between party members, an all new "Aerial Combo" system, a "Strategy Advice System" and much more. In this way, the player can now experience even more ferocious and pitched battles!The game's overall producer is still the series' staple Hidenobu Takahashi, while the main scenario writer is Takahiro Hasebe from Grandia I. The moving music has still taken charge by Grandia series' Noriyuki Iwadare!グランディアシリーズの最新作が遂に登場！シリーズ1作目よりユーザーから絶大な支持を得ている戦闘システム「アルティメットアクションシステム」は、新次元バトルシステムへと覚醒。カウンター攻撃により敵の動きまでをコントロール出来る。さらにゲーム性の向上や仲間の連帯感の強調を考え、「空中コンボシステム」を搭載。息をもつかせぬ興奮のバトルシーンは圧巻。

If you are familiar with Grandia III, why not let others know?

gusthead (16) on 22, Aug. 2011 09:37 (HKT)
not as good as the first two
a solid game, though lacking innovations gameplay-wise. you will like it just not as much as Grandia I or II for sure.
[This review is based on another version of this product]
gamescook (35) on 02, May. 2010 10:32 (HKT)
Soars and Crashes
Very solid gameplay is marred by an insultingly simple story riddled with the most plot holes I have ever seen. I guess I grew up between playing the second installment and this.