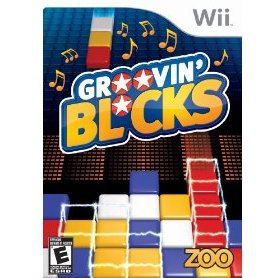 Get ready for a puzzle game unlike any you’ve ever seen! Groovin’ Blocks brings a new twist to classic puzzle gameplay. It’s addictive! Maneuver colorful blocks and drop them in like-colored clusters to clear the board. But this is not your average puzzle game. An original soundtrack with all new beats really drives the gameplay in Groovin’ Blocks. Drop the blocks on the beat for higher scores and bonuses - and really let the music take over! The successful WiiWare™ game is getting beefed up for an expanded experience for Wii™! All new levels, brand new songs, and hours of more puzzling gameplay! And for the first time, you’ll be able to take Groovin’ Blocks on-the-go with a whole new iPhone edition! Play to the music with Groovin’ Blocks!

If you are familiar with Groovin Blocks, why not let others know?

InfernalMonkey (214) on 17, Oct. 2009 11:35 (HKT)
Fresh take
Features a lot more content than the WiiWare version. Enjoyable puzzle game that has you dropping and matching blocks in time with the beat. Very addictive.

And there's a Commodore 64-themed song!