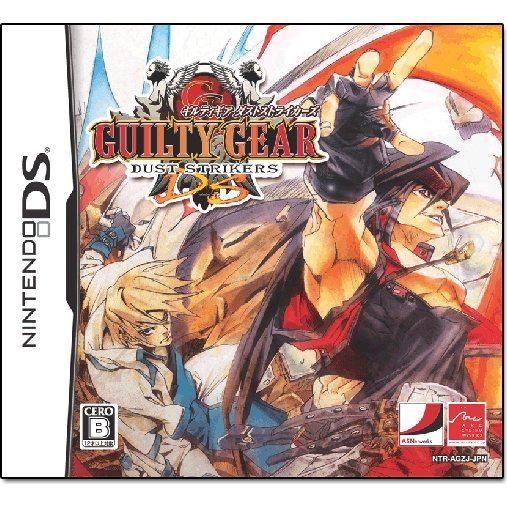 If you are familiar with Guilty Gear Dust Strikers, why not let others know?

When I heard that I could finally play the game on my trusty DS, I was ecstatic. However, after playing Isuka, my excitement dwindled away. 4-player Guilty Gear DOES NOT WORK. Especially when you need to assign a whole new system to be able to simply turn around.

So, they had ruined an otherwise flawless series of fighting games with 4-player modes. What could they do next? Aha! Multi-tiered stages and power-ups! Have Majesco forgotten everything that people loved about Guilty Gear? The fast paced action, the insane attacks, leaping through mid-air before slamming down on your opponent with your sword. Now it is more a case of leaping into the air... to land on an upper platform and be unable to hit your opponent...

What\'s more, they didn\'t even have the common sense to include a basic 2-player option, so that fans can play Guilty Gear as it was meant to be - with no awkward turning, and no distraction from a fight going on elsewhere. Guilty Gear is a one-on-one battle game. Nothing will change that.

The lack of a single-cart mode certainly doesn\'t help.

If you want Guilty Gear for your DS, buy Bleach DS. It\'s the closest thing you\'ll get. However, since it was built with 4-players in mind (although default play is with 2-players), it is a very well built and balanced game. Bleach DS was also able to support single-cart play, albeit with long loading times.

Sadly, it seems us Guilty Gear fans will have to wait a long time before we get to play the best beat-em-up out there on our DSs.
[This review is based on another version of this product]
Anonymous on 15, Jul. 2006 03:07 (HKT)
Not bad really
Plays a little like King Of Fighters, but with the items from Power Stone added. As with ALL beat \'em\' ups it takes a while to learn all the moves, so when you first go on it, things can get frustrating. Its only till later, after you\'ve got good with one character is when the action really starts, Story Mode with 4 players is where its at, and once you realise how to attack on upper and lower floors, you start to realise, actually this game kicks ass!!. Although I cannot give it more than 4 stars due to the lack of Practice Mode. Concidering most people are migrating from street fighter, and have a whole load of new moves to learn, this would have helped immensely. Apart from that, it rocks!
[This review is based on another version of this product]
N - Player on 01, May. 2006 02:00 (HKT)
What?
^^^

Your just saying that because it fits Play Station 2 and Play Station Portable better. Quit being Jelouse. It\'s our turn now.
[This review is based on another version of this product]
hushicho (20) on 30, Apr. 2006 18:17 (HKT)
A Huge Waste
While the graphics for this game are astounding and the music and sound effects are excellent, overall this game is a waste of time unless you just feel like you must have a portable Guilty Gear game. The only modes you can play by yourself are the arcade and story modes (which may as well be the same thing) and the minigames; unlike most other Guilty Gear games in the series, and rather unwisely for a handheld, they enabled no ability to play vs the cpu on your own except in random fights which will, with equal randomness, lock up your system entirely and may lose you your stored data. This isn\'t unknown in the DS titles from Majesco, but one would think that after pushing back this title\'s release so many times they\'d get it solved.

More or less this game is a time (and money) waster. There are dozens of vastly superior games for the DS that don\'t lock it up or require you to leave your wireless wide open for whomever might want to join in. There are also many games where you can play by yourself, which in my opinion is fairly essential for a handheld game. This isn\'t one of them. In fact, this game manages to seriously defeat its own purpose as the controls are also not that great and, while the signature moves are still there, the feel of the game is very different. Overall it is a title best forgotten. The only reason it gets two stars instead of one is for the obvious effort put into the graphics and sound. Everything else is an absolute shame about this game, and Majesco should be ashamed of themselves for ever allowing it to be released in this state, especially after the outright dishonest promotional materials surrounding it.