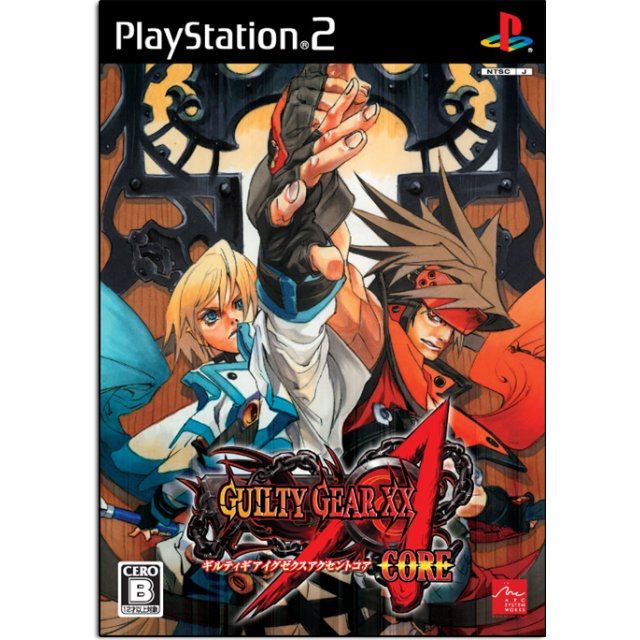 sold Out of print / Out of stock.
Manufacturer
Sega
Rated By Our Customers
Compatible With PlayStation 2™ (PS2™)
Version

Sega/Sammy's popular fighting game series Guilty Gear XX gets yet another update, which was released in Japan Arcades in the end of 2006.

Accent Core features a type of special move, the "Force Break", which consumes 25% of the Tension bar when used, in addition to balance changes along the lines of those in #Reload and Slash. Most characters have gained new special moves, and some have had existing specials (or powered-up versions of existing specials) converted into Force Break attacks. It also introduces moves that make opponents stick briefly to walls or slide across the floor of a stage.

In addition to its gameplay changes Accent Core features the first major aesthetic change for the series since the original release of Guilty Gear XX. All voices, including that of the announcer, have been re-recorded (or replaced with previously unused samples), sometimes by different actors. The playable characters artwork was also redone.

If you are familiar with Guilty Gear XX Accent Core, why not let others know?

[This review is based on another version of this product]
parini.stefano (17) on 15, Nov. 2007 03:13 (HKT)
Guilty Gear never miss!
I\'ve played almost all Guilty Gear games, this is a great game and is highly suggested to anyone who likes a bit the fighting games!
mckyja (9) on 31, Jul. 2007 23:06 (HKT)
Upgrade from Slash that does a great job!
I have been playing the GG series since 2001, and I have to say, this is by far, the best one of the series. The updates are excellent, with new moves, combos, balance tweaks, and even hidden supers for some of the characters! The graphics are fixed up a bit, some stages are new or have a different setting. The voices have been changed, and yes, the announcers voice may be annoying at first, but once you get into the fighting, you ignore it. It is a MUST BUY if you like the series, or you play it in tourneys, or even with your friends!
honk (15) on 26, Jun. 2007 23:24 (HKT)
Overhaul
GGXX AC has some major balance tweaks and audio/visual changes that leave me with mixed feelings. First of all I don\'t see why they kept I-NO as the final boss. She is way to strong compared to the other fights in arcade mode. But instead they ruin characters like SOL and JAM saying it is necessary to establish the new fighters. By the way: There are none. This is ARC System\'s way of saying thanks.
choanikijin (141) on 23, Jun. 2007 16:29 (HKT)
No glitches so far (crosses fingers)!
Great sequel to end all sequels. A lot of rebalanced characters at the expense of others. Cool new tracks, as expected from ARCSY, but dammit the new voices suck, reminds me of the time Capcom used that lame-o announcer for SSFIIX. Maybe they got the same guy to do ths game?

As usual, all this is just practice, see you on the tournament circuit! Heaven or Hell, LET\"S ROCK!
abobo.leyba (1) on 20, Jun. 2007 08:15 (HKT)
What glitches?
I ordered the game the day it came out and me and my girlfriend have been playing it since and have not encountered any glitches at all. We went through every character just to make sure since some glitches I read were character specific but encountered none whatsoever. Accent Core is a great, fast pace game and I suggest GG fans to pick it up!
1 »