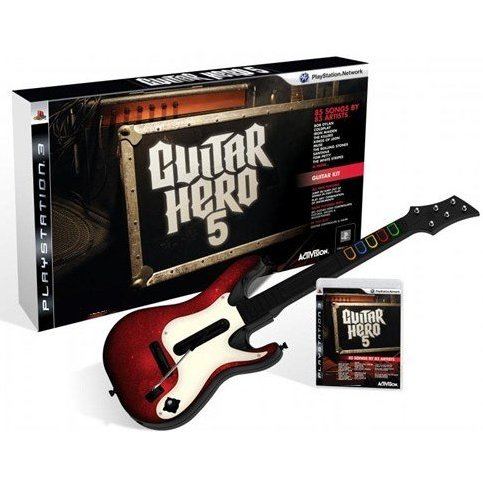 Collections
Activision
Rated
By Our Customers
Compatible with PlayStation 3™ (PS3™)

sold Out of print / Out of stock.
Manufacturer
Activision
Rated By Our Customers
Compatible With PlayStation 3™ (PS3™)
Version

For the first time ever, players can customize the make-up of their band by rocking with any combination of instruments in-game: whether it be two guitars and two drums, or three guitars and a microphone, any combination is possible, allowing players to experience music their own way. Brand new, innovative, easy-to-use gameplay modes like Party Play and RockFest put fun, competition and control at center stage as fans tailor the Guitar Hero experience to match their personal style and interests. For extended hours of entertainment, downloadable content from Guitar Hero World Tour is compatible with the game and can automatically be updated to include all of the upgrades and enhancements of Guitar Hero 5. Guitar Hero 5 features the strongest, most varied set list to-date comprised of master tracks from 85 of the hottest bands of today and the biggest classic acts including; Kings of Leon, The Rolling Stones, The White Stripes, Santana, Vampire Weekend, Tom Petty, Johnny Cash, Bob Dylan, plus more than 25 artists from a variety of music genres that are making their music video game debut. Among the first-time-ever features of Guitar Hero 5 are: Party Play, where players can jump in or drop out of gameplay seamlessly; RockFest, a comprehensive competitive experience available featuring five new head-to-head modes playable online or in your living room; and the ability to play the entire set-list from the first time the game is turned on. Guitar Hero 5 refines the player experience, enhances the art style and redesigns core features such as GHMusic StudioSM, making it the most accessible, fun-to-play and authentic experience for seasoned music gamers as well as first-time players. New innovations such as Band Moments, where bands are rewarded for hitting special note streams together and song challenges where gamers are tasked to play through a song a specific way, add a new competitive layer of excitement and accomplishment to the music rhythm genre.

If you are familiar with Guitar Hero 5 (w/ Guitar), why not let others know?

I noticed that the price i ordered it and the price now are slightly different, so it's cheaper now, do grab it! Enjoy!
[This review is based on another version of this product]
donkatz (9) on 24, Feb. 2010 16:25 (HKT)
Very Fun Game
if you love to play guitar hero you must buy it
Guitar Hero 5's track list contains 85 songs by 83 separate artists, pure fun
[This review is based on another version of this product]
goldust2002sg (7) on 03, Dec. 2009 15:01 (HKT)
Being used to Rock Band...
I didn't quite like this game. Not only are the fret runners hard to see (the screen is both dim and small - and no it's not just my TV), the timing of the game for the guitar is incomprehensibly hard to get. My friends and I "just can't get it". Plus, the choosing of difficulty and bass/guitar comes before the game, not before each song.

That said, the bar style for the vocals is a lot easier to manage than Rock Band's, and the range of songs is more varied - which some prefer as a change of pace. One of my friends who's a jazz drummer loves the funk songs available.

I'd give it 3.5 stars - it's a good game but being used to the Rock Band franchise, I cannot be but slightly biased against it.
[This review is based on another version of this product]
ahmad-almuhairi (2) on 05, Nov. 2009 22:50 (HKT)
Guitar Hero 5
Same as the other Guitar Hero's

Bad:
- I think this the first guitar hero that you must use guitars,drums...etc

you can't use the normal 360 Joystick

So if this the first time you play guitar hero

buy the guitar bundle.
[This review is based on another version of this product]
blackumbra (25) on 23, Sep. 2009 10:48 (HKT)
Fun game
The improvements to the gameplay are good. For example, you can play any instrument you want, so if all your friends want to just sing or if everyone wants to play the guitar, that's possible now. No more fighting over who gets to play which part. You're allowed to play any song from the list as soon as you start the game. Unfortunately I didn't know about 80% of the songs, so it made the karaoke part of the experience a little difficult. Why does Guitar Hero choose such obscure songs all the time?