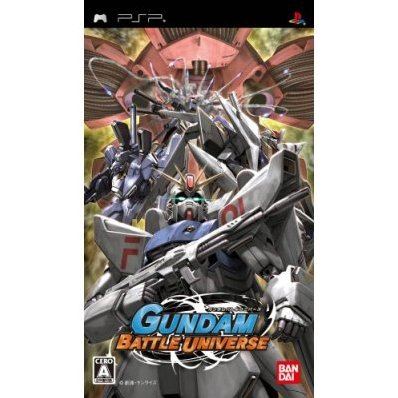 sold Out of print / Out of stock.
Manufacturer
Bandai Entertainment
Compatible With Sony PSP™ (PSP™)
Version

Gundam Battle Universe is the most comprehensive Gundam action, it has inherited the thrilling system of its predecessor Battle Chronicles and is combined with elements from Gundam ZZ and Gundam Char's Counter Attack. There are more than 200 mobile suits for you to pilot and around the same number of missions for you to complete.

Battles are seldom fought by one person alone, win the battle and open the path to a new era with your friends. This game focuses on cooperation, some missions are designed to be difficult when you carry it out individually, but with the help of your friends, they become less impossible.

A lot more freedom is allowed during your customization of Gundam Suits, so feel free to ensemble the best mecha for your missions.

If you are familiar with Gundam Battle Universe, why not let others know?

[This review is based on another version of this product]
Fred (58) on 15, Nov. 2012 14:56 (HKT)
Gundam Battle Universe
My first gundam game and I can say he is good.
Many robots, many options. The gameplay is simple.

But I think in this time the japanese game can introduce english language for all game.
Its a minimum today.
[This review is based on another version of this product]
kirahero5 (69) on 27, Apr. 2012 13:29 (HKT)
Best gundam action for psp!!
feel like climax UC which is another masterpiece!!
sefra114 (10) on 05, Aug. 2009 03:04 (HKT)
Amazing Game!
Gundam Battle Universe is an amazing fighting game. There are loads of missions to play, tons of pilots and mobile suits, I can guarantee you'll be playing this game for a long time, I for one, can barely take my hands off of it! I strongly suggest this Gundam game over others on the PSP. 15/10, great game!