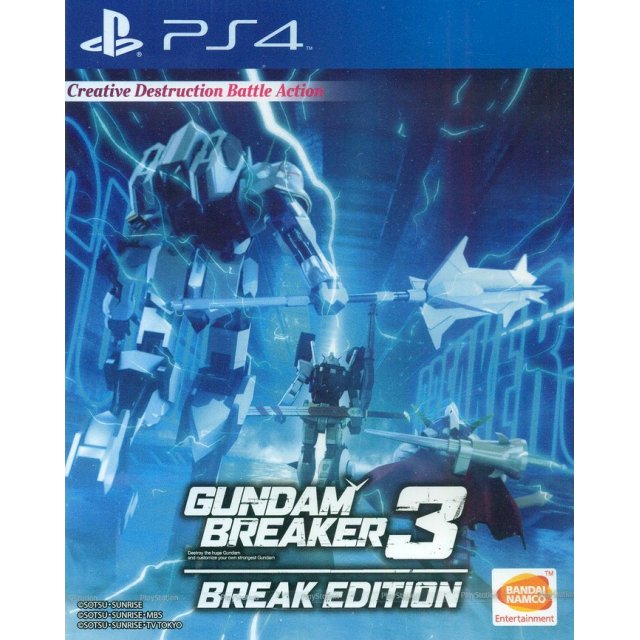 Works on all systems sold worldwide, a correct regional account may be required for online features.
24h In stock, usually ships within 24hrs.
US$37.99
Our previous price:US$ 39.99
You save: US$ 2.00( 5% )
Bandai Namco Games
Rated By Our Customers
24h In stock, usually ships within 24hrs
Price
US$37.99
Our previous price:
US$ 39.99
You save:
US$ 2.00( 5% )
Play-Asia.com Return & Refund Policy
Click on a thumbnail to see more pictures for Gundam Breaker 3 Break Edition (English Subs)

xenogears2 (5) on 19, Sep. 2020 23:27 (HKT)
Best gundam game I've played
If any gundam breaker game was localizated, it should have been This one. Probably everything I can ask for from a definitive edition, all dlc, it's on disc, and already updated to latest. installation was super fast, pretty much just pop in and play.
Luke1992 (2) on 31, Dec. 2019 17:04 (HKT)
First Time Gundam Player
This is my first time playing a Gundam game and thought I'd give it a try as I saw a few people say this game is really good. I have played around half way through but the gameplay is ridiculously fun and addictive. The graphics are definitely not the best but for me it's not the most important thing. It's really well worth a pick up if you get the chance.
pczerh (1) on 30, Dec. 2019 23:45 (HKT)
Great game for a Gundam fans
I bought two games for Christmas for my nephews: Gundam Breaker 3 BE and Assassin's Creed Origins. AC:O is the great, huge and complete game but now they play only Gundam Breaker.
rgillespie94 (2) on 08, Dec. 2019 00:33 (HKT)
Better than New?
In the admittedly brief time I've played the game (I bought two games in the same order), I have to say, Gundam Breaker 3 is a hell of a lot funner than 3. The customization feels way better when your parts have levels. I like it.
swalls714 (2) on 24, Sep. 2019 10:01 (HKT)
Gunpla action at it's best!
I was skeptic after the fall of New Gundam Breaker.
Granted I did not know of this game or the concept of region free PS4 and I had the chance to enjoy NGB while I was recovering from surgery.

This was an absolute must when I was in depression and the game is FLAWLESS! Better to buy the break edition and english sub as if it was localized in America. Very different when from NGB. 10 stars out of 5 for this game.
1 »