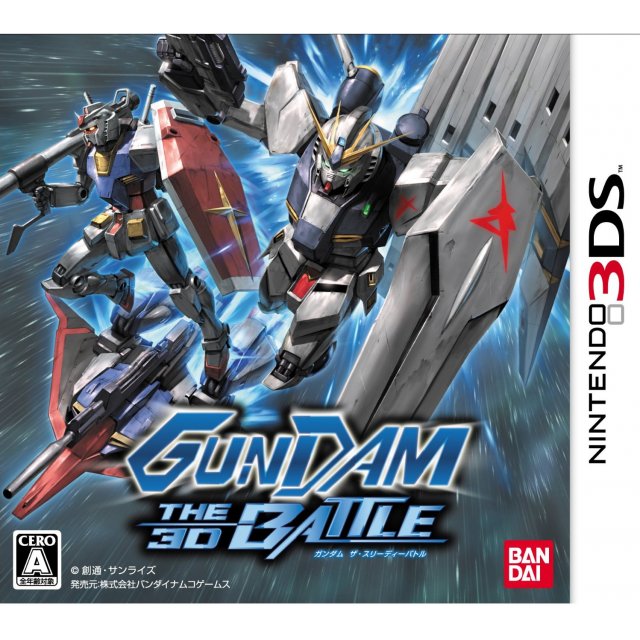 Bandai Entertainment
Rated
By Our Customers
Compatible with Nintendo 3DS™ (3DS)
For JPN/Asian systems only.

sold Out of print / Out of stock.
Bandai Entertainment
Rated By Our Customers
Compatible With Nintendo 3DS™ (3DS)
Version

Take your mobile suit on a 3D adventure. Create your pilot, determine his class, fighting style and get a Gundam that suits your tactics. If you have watched the anime or know the strengths of the mobile suits, then more power to you.

Accept missions to proceed with the story, famous battles from anime are included, you can now see things from the enemies perspective and change the history of the galaxy. Share data with other Gundam fans with the Surechigai tsushin and unlock the co-op missions.

With an improved game system and new skills up your armored sleeve, you can sweep the universe into a blaze.

If you are familiar with Gundam the 3D Battle, why not let others know?

Cress (13) on 03, May. 2013 21:35 (HKT)
The best Gundam game on the 3DS
This game is really great, i thought it was going to be a medicore game, but when i started it up and began to play it for a couple of hours i got blown away of its awesome grafics and sounds.
The game has also the music from the anime, and thats a big plus.

If you are a Gundam fan, then buy this game, you wont be dissapointed.
loussier23 (7) on 25, Aug. 2012 18:09 (HKT)
The first gundam game with 3D graphics which is good, but the contols are quite difficult, game is short too.
peter.ppatrici (153) on 18, May. 2012 20:47 (HKT)
Good gameplay
Not bad gameplay with good 3D graphics and lots of actions. Game is a little short though
gundamalpha (181) on 15, May. 2012 09:58 (HKT)
A little short
Compared to the usual Gundam Battle series this game is a bit underwhelmed, which is expected whenever an established franchise ported to a new tech console, in this case a beautifully done 3d graphics. It's still fully enjoyable though, so get while you can.
tem_jin (168) on 09, May. 2012 14:21 (HKT)
One of the best gameplay.
Camera angle, special effects, bullets whining by, this game is top notch gundam game.
1 »