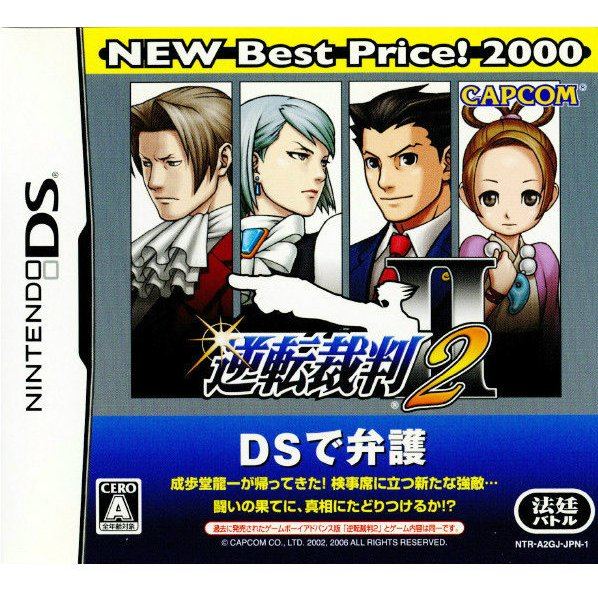 Works on all systems sold worldwide, a correct regional account may be required for online features.
24h In stock, usually ships within 24hrs.
US$13.99
Our previous price:US$ 35.99
You save: US$ 22.00( 61% )
Manufacturer
Capcom
Rated By Our Customers
Compatible With Nintendo DS™ (NDS™)
Version

Works on all systems sold worldwide, a correct regional account may be required for online features.
24h In stock, usually ships within 24hrs
Price
US$13.99
Our previous price:
US$ 35.99
You save:
US$ 22.00( 61% )
Play-Asia.com Return & Refund Policy
Trustpilot
Trustpilot
Click on a thumbnail to see more pictures for Gyakuten Saiban 2 (New Best Price! 2000) / Phoenix Wright: Ace Attorney Justice for All

Enter a courtroom like no other in the sequel to Capcom's surprise hit Phoenix Wright: Ace Attorney.Phoenix Wright: Ace Attorney Justice for All (aka. Gyakuten Saiban 2 in Japan) introduces four new cases featuring new characters, plot twists and gameplay features. Players resume the role of Phoenix Wright, a defense attorney who must prove his client's innocence against the toughest of odds and most ruthless of adversaries.As in the first Phoenix Wright game, each case involves two distinct storylines. In the investigation phase, you survey crime scenes, interview witnesses and gather evidence that will be used in court. Then it's on to the court phase, where you pesent findings from the investigation to support your case, listen to testimonies, cross-examine witnesses, and tease out fact from fiction so you can prove your client's innocence. All presented in a comical anime style.Just like its predecessor, Gyakuten Saiban 2 features full English/Japanese text support. Just press the lower button on the game's start screen to switch the game into English.Gyakuten Saiban 2 is the second game in the popular court room battle series from Japan and ported from the original GBA™ version Gyakuten Saiban 2 to the Nintendo DS™. The game is released as "Best Price" budget release version right away.

If you are familiar with Gyakuten Saiban 2 (New Best Price! 2000) / Phoenix Wright: Ace Attorney Justice for All, why not let others know?

Story:
The game has 4 different chapter which have nothing to do with each other, and each chapter has nothing to do with each other, they are seperate cases. You play as a lawyer named Naruhodou Ryuuichi/ Phoenix Wright, as you defend clients and win the case. Each case is unpredictable and hard to crack, but each time you get your "Objection!" right, you'll get a pleased feeling.

Gameplay:
The game is viewed in a first person perspective. There are two stages to each case, Investigation and Trial. During Investigation, you go around talking to witnesses, Detectives, your partner and other people trying to find out information. Sometimes they might be hiding secrets which you unlock using a magic item called the Magatama. With the Magatama, you present evidence to the person you're talking to try unlock their "Psyche-Locks" which are hiding their secrets. Each time you present the wrong evidence, you lose some of your life bar. In Investigation, you also examine the crime scene and other related areas to find new clues related to the case. In the Trial stage, you put all your Investigation to good use and present what you have in court. You do this by cross-examinating witnesses, by finding contradictions by touching or yelling "Objection!" or pressing the witness with "Hold It!".

Music:
There's not much to say, all the music in the game is good. There are great suspensul tracks the play in court, saddening tracks, and quite cheerful tracks too. The music in this game is wonderful.

Overall:
If you enjoyed the last game, you know you're going to enjoy this game, and you're going to enjoy this game, there are still 3 games in the series after this to play. In Gyakuten Saiban 2, There's probably not anything bad about this game at all, other than the fact that people who hate reading or have trouble reading are going to have a tough time with this game. But, for the people who don't mind puzzle cracking and a load of interesting dialogue to read, I recommend this game to you. As I said before, the Story's great, the Gameplay's great and the Music's great. I give this game a 9 out of 10.
jericto (4) on 17, Jul. 2010 13:43 (HKT)
Justice for me!
Having this game made my days. Awesome story, nice musics, and very intense fights. A must have!
1 »