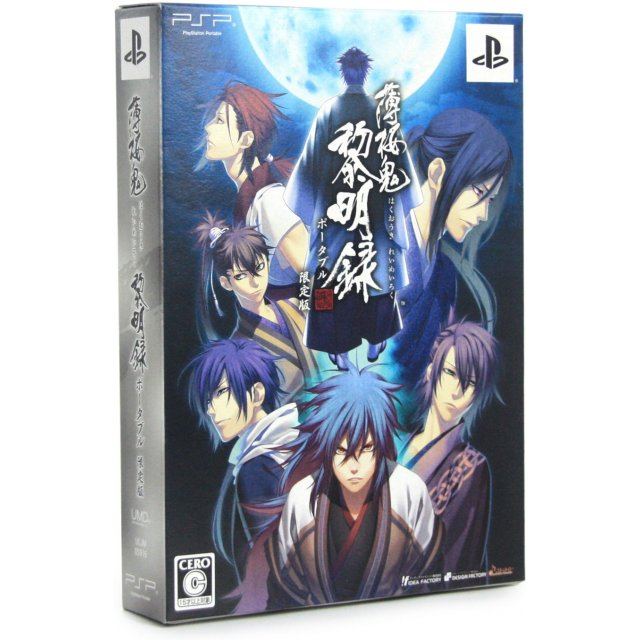 sold Out of print / Out of stock.
Please take note that, once purchased, this item must be paid immediately and cannot be cancelled or returned.
Manufacturer
Idea Factory
Compatible With Sony PSP™ (PSP™)
Version

See how the Shinsengumi came to be in Reimeiroku. Everything started when a beaten up, impoverished young man named Ibuki Ryunosuke meets Serisawa Kamo - the first leader of the Shinsengumi. The stellar cast of seiyuu such as Miki Shinichiro and Seki Tomokazu will voice the charismatic men and there are more delicately drawn illustrations to collect in this game.

Hakuoki: Demon of the Fleeting Blossom
US$ 24.99

If you are familiar with Hakuouki: Reimeiroku Portable [Limited Edition], why not let others know?

worldangel93 (10) on 12, Apr. 2012 04:17 (HKT)
Great game !!!
Very interesting game for sure !!!
it will keep you entertained for hours, but keep in mind the level of violence is a bit high in this game, over all its a very good game. instead of impressing the guys to fall in love with you you`ll gain their friendship since the main character is a guy named Ryunosuke , not a girl.
For anyone who has an interest to know how things were before Chizuru came into the picture, this game is for you !
[This review is based on another version of this product]
fuyuka (54) on 25, Aug. 2011 22:19 (HKT)
This is not a dating sim game
I can't decide whether or not I like this game.

First, this is not a dating sim game - the main character is male.
This game is a prequel to the original Hakuouki game, and it tries to give background on the Shinsengumi and how it came to be before Chizuru came into the picture.

1.) Game system - Easy saving, quick access to where you left off, a flow chart so you can see how your decisions have affected the story. One thing I liked was how they added depth perception to the the character voices. When the main character speaks, they try to make it sound as if it's coming out of your own mouth, and if someone speaks to you from afar, they try to make it sound so. Also, they added the ability to save the artist's graphics as photos in your psp.
2.) Voice acting - the actors are, as always, great and do an excellent job with their characters.
3.) Graphics - Again, this goes without saying. Kiyone Kazu's graphics are always beautiful.
4.) Bonus CD - Cute bonus CD if you get the preorder package - it's a mid-summer scary story drama CD.
5.) Character development - It varies "how much" new character development there is depending on which character route you follow, but if you have a preferred character from the original Hakuouki game, this may (or may not) be something you want to see. Personally, I liked Heisuke's route the best - he was my least favorite character going into the game but I like him a lot more now that I played this game. Unfortunately, there were some characters that went the other way.
6.) Side Stories - The Izayoi Souwa(s) are little side stories they insert throughout the game, told from various point of views. Depending on your "friendship levels" with each character, different stories appear. I enjoyed this idea, as you get to take see things through the eyes of different characters.
7.) Main character - Ryunosuke Ibuki definitely has an attitude (^_^). Usually, the main characters in visual novels tend to be fairly transparent so the player can identify with him/her and get into the game. However, in this case, they gave the main character a (distinct) personality. The result - you may or may not like him. If you like him, that's great. You will probably enjoy the game more this way than if they had used a transparent main character. If you don't like him, well, you're out of luck. I personally found him to be "tolerable" to "annoying" depending on which character route I took.
8.) Storyline - I found some of the "decisions" you have to make to progress the story forced. Also, they give too much information in this game for it to be a proper prequel to the Hakuouki series. In other words, if the characters knew this much going into the original game, then things would have progressed differently with Chizuru. Some things you can let slide, others actually affect story development.

I'm almost done with this game. I've yet to complete 2 characters (1 major character, 1 hidden character), but have otherwise played through all other good and bad endings. And I have to admit, I'm confused. I don't know what the developers wanted to do with this game.
It's not a dating sim game, as the main character is male.
At the same time, it's not a friendship novel game either, as you conclude each character's story from Chizuru's point of view, not Ryunosuke's. Why did they do that? She doesn't even appear in this game. That's messy. Not only does this make it harder for the player to approach this game as an independent story from the original game (something I tried to do namely because of some of the inconsistencies in storyline), it doesn't give Ryunosuke's story a proper end. The main character is Ryunosuke, not Chizuru. They should have concluded with him.