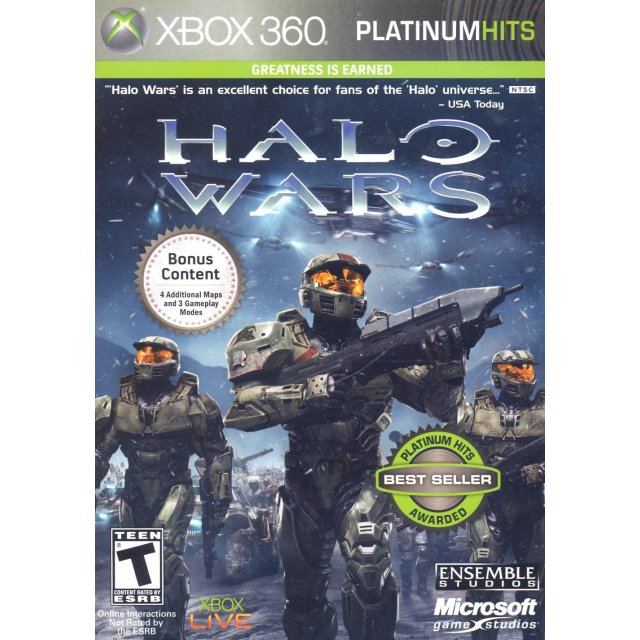 Works on all systems sold worldwide, a correct regional account may be required for online features.
1w Expected stock arrival within 1 week.
US$20.89
Our previous price:US$ 23.99
You save: US$ 3.10( 13% )
Manufacturer
Microsoft
Rated By Our Customers
Compatible With Xbox360™, Xbox One™
Version

Works on all systems sold worldwide, a correct regional account may be required for online features.
1w Expected stock arrival within 1 week
Price
US$20.89
Our previous price:
US$ 23.99
You save:
US$ 3.10( 13% )
Play-Asia.com Return & Refund Policy
Click on a thumbnail to see more pictures for Halo Wars (Platinum Hits)

Halo Wars is an exciting strategy game based on the legendary Halo® universe. In campaign mode, command the armies of the UNSC warship Spirit of Fire, with familiar and new UNSC units in its initial encounters against the Covenant, an alien coalition threatening to obliterate mankind. Halo Wars will immerses you in an early period of the storied Halo universe, allowing you to experience events leading up to the first Halo title for Xbox®.With the guidance of Serina, a spirited artificial intelligence (A.I.) persona, direct legions of UNSC soldiers, Warthogs, Scorpions, and more, each group having its own strengths and uses in battle. Adventurous commanders can also call upon ancient Forerunner technology, if they are fortunate enough to find it hidden throughout the battlefield.Covenant forces are also waiting for you to lead them into battle in multiplayer skirmishes via the New Xbox Experience. Call upon an arsenal of new and familiar Covenant units such as Grunts, Elites, Ghosts, and even Scarabs to defeat foes on the battlefield. Strategic-minded players who react well under pressure will emerge victorious.

If you are familiar with Halo Wars (Platinum Hits), why not let others know?

edieflatland (7) on 23, Aug. 2012 09:10 (HKT)
Great!
Recieved my game yesterday. Halo wars is the best RTS games on xbox 360. Smooth controlling.
inaka_rob (196) on 26, Oct. 2011 14:19 (HKT)
WAY better than I thought it would be!!!
When this game first came out it received pretty bad scores all across the board. When the price came down, I decided to pick it up and I should not have waited so long to buy this game. It looks pretty good. Other RTS games I have played on the 360 like Universe at War suffer from frame rate issues. This game is not very deep for an RTS games, but it is still fun, and the becuase it is a rather simple RTS game the controls are streamlined and easy to use. I enjoyed this game both as a Halo fan and as a RTS fan. I hope they make sequel. If they do I will not wait so long next time to buy it, and pay less attention to the reviews.
lord-magneto (15) on 16, Sep. 2011 16:56 (HKT)
Halo Wars (Platinum Hits) + Bonus
Great game. Awesome storyline and a bonus included. When you buy the Platinum Hits Ed, you receive inside, codes for the Strategic Options Pack and Historical Battle Map Pack game add-ons. Very easy to use controls and extremely fun online options. It's a must buy for your Halo game collection.
quake_ranger73 (143) on 15, Aug. 2011 14:43 (HKT)
Play HALO RTS with your X360
The last game from the great ENSEMBLE Studios. Easy to get into but hard to put down once you mastered to control the units. Fun and fast gameplay with cool effects and units. Really a great game for HALO fans.
erikqkh (1280) on 14, Aug. 2011 01:24 (HKT)
Good
Good game!
1 »