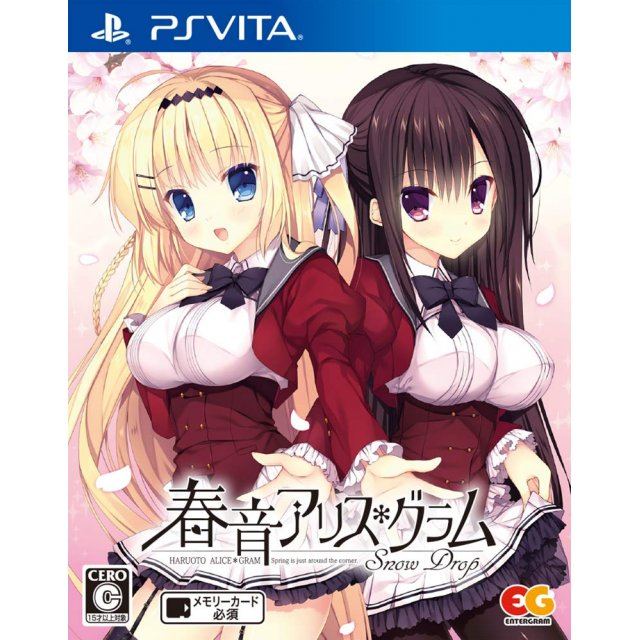 Works on all systems sold worldwide, a correct regional account may be required for online features.
24h In stock, usually ships within 24hrs. (Only 1 left in stock.)
US$51.99
Limited time offer - Secure yours now before the offer expires!

Works on all systems sold worldwide, a correct regional account may be required for online features.
24h In stock, usually ships within 24hrs
(Only 1 left in stock.)
Price
US$51.99
Our previous price:
US$ 64.99
You save:
US$ 13.00( 20% )
Play-Asia.com Return & Refund Policy
Trustpilot
Trustpilot
Click on a thumbnail to see more pictures for Haruoto Alice Gram: Snow Drop

Seiryou Gakuen is a popular high-ranked school in the seaside city of Minato which prides itself on the latest facilities and student independence. Since a year ago, it has been managed concurrently by the student council and the new entrant's council.

Soutarou is a second-year student who is part of the ‘twilight club’ (tasogare-bu) that was formed under special circumstances and is governed by the student council. It helps with minor things like searching for lost objects and resolving troubles and worries. Even though every day is busy, they are carefree and he gets to walk to school with the student council president who he looks up to and talk with the beautiful club leader.

One day, he received a letter with no name on it:

“Will you be able to solve the repeated problems that will happen from now on?”

At the same time, a helicopter descended upon the school. The club was then besieged by various troubles: negotiations with the two school councils, a place with snow cherry blossoms, a mysterious clock tower, and a mysterious ability that could be used only by a few select people. There are many secrets called "alicegram" which lie buried in the town. Will Soutarou be able to solve them all?

No reviews for Haruoto Alice Gram: Snow Drop yet.