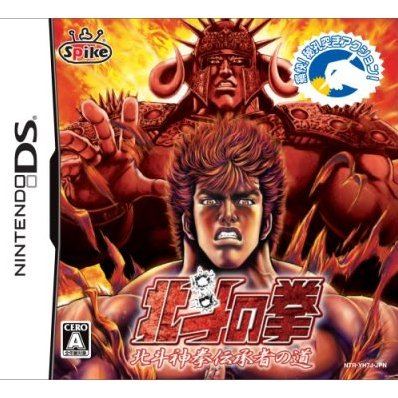 Works on all systems sold worldwide, a correct regional account may be required for online features.
1w Expected stock arrival within 1 week.
US$39.99
Manufacturer
Spike Chunsoft
Rated By Our Customers
Compatible With Nintendo DS™ (NDS™)
Version

Works on all systems sold worldwide, a correct regional account may be required for online features.
1w Expected stock arrival within 1 week
Price
US$39.99
Play-Asia.com Return & Refund Policy
Click on a thumbnail to see more pictures for Hokuto no Ken: Hokuto Kami Denshoumono no Michi

In this game, modeled after the classical martial arts comic of the same name, you would strive to achieve the mysterious, ultimate martial art move. Come join in the heated battles to become the wielder of this powerful move!

If you are familiar with Hokuto no Ken: Hokuto Kami Denshoumono no Michi, why not let others know?

M4xImU5 (209) on 14, May. 2013 08:54 (HKT)
Awesome game
Too bad it's Japanese only, because I'm a big fan of Hokuto no Ken. Must have!
fabiohnk5 (73) on 08, May. 2011 17:16 (HKT)
Manga Game
This original game give you all the feelings of Manga
arnaudpichon (56) on 13, Apr. 2011 06:31 (HKT)
This game is part interactive manga, part rhythm game. You don't need to know japanese to play, but then you should be familiar with the manga (Hokuto no Ken - Fist of the North Star) to really enjoy it by re-living the story. I bought it since i loved the manga and my expectations were met, but I guess you could be disappointed if you don't know the story and characters
xiao21 (1) on 22, Feb. 2009 04:36 (HKT)
Great for fans.
In a sea of poor Hokuto no Ken games, Denshoumono no Michi is a fresh take on the series... And it's a puzzle game. You'll go through the story as three characters (Ken, Rei, and Raoh) tapping, slicing, drawing your way through hoards of opponents. The game starts easy enough, but builds to be challenging... And rewarding. My problem with it is drawing lines and arrows, as it's persnickety as anything. If you're a little off, too bad. This is a problem in Rei's levels. Also, defense is a little touchy. Overall: Fun, cheap, a good time-waster.
champagnedragon1 (1) on 03, Sep. 2008 19:04 (HKT)
Hard to define, but awsome
This game is really hard to define. Basically you press a bunch of circles and paterns on the screen to get to the next manga panel. I love this game, but its hard to recomend to people.
1 »