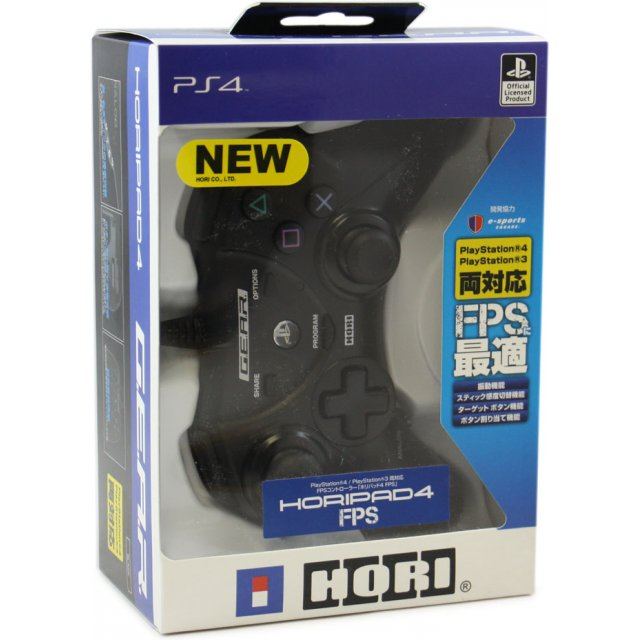 Chou no Doku Hana no Kusari: Taishou Irokoi Ibun
US$ 54.99

If you are familiar with Hori Pad 4 FPS (Black), why not let others know?

One big minus is lack of touchpad button, without it you can't use maps and other functions in PS4 games.

things a don't like are the lack of a touch pad. no rumble. and no mic headset socket. but you can just buy a cordless headset. this is why i'm giving it 3 stars instead of 5.
adnanj (1) on 25, Nov. 2014 03:14 (HKT)
Works as intended
Brought this item off of Play Asia recently, this is the first time I've purchased anything off of this website and was extremely happy that the shipment was done sub-20 days to my address.

Regarding the controller itself, it is one of the rare controller with 360 style pads authorized and licensed by Sony, made by Hori, which is a known name.

Controller feels large in hands compared to the tiny PS3 pad, also hefty and weight-y. However, important thing is that the sticks have good response, there is a bit of a deadzone but its not too much to be an issue, also the analog sensitivity slider on the bottom helps.

The best feature, in my opinion, are the two extra buttons below the R1 and L1, which I usually use to substitute for the clicking in buttons of L3 and R3 (usually Sprint and Melee in shooter games). Furthermore, the fact that EACH button is re-programmable, is amazing. For PS3 games that don't allow shoulder switching, i can just map the shooting to the trigger like buttons.

Overall, minus the $10 extra it took for shipping, I am very happy with the purchase.
Phil (1) on 16, Sep. 2014 08:58 (HKT)
Useless
I bought this controller because I find the PS4 controller very awkward to hold due to the placement of the thumb sticks. I'm used to the 360 layout, which the Hori Pad 4 uses. Great. But it has a major defect which makes it entirely useless... it has no equivalent button for the touchpad. Every game I've played on my PS4 has used the touchpad as a button. In Destiny for example it's used to bring up your mission goal, summon your speeder bike and exit or join a mission. So it's pretty vital. So unless I'm missing something (and someone please point it out if I am) you can't do any of that when using the Hori Pad. It makes you wonder what they were thinking when they designed it.

Other issues I had with it was I found moving and shooting a bit awkward due to how the thumbsticks responded. Can't quite put my finger on it, I just found it difficult. But I think I would have been able to get used to it given time. It has a little trigger button on the bottom which I believe is to slow down the sensitivity while aiming, a sort of sniper mode. There is a dial to adjust how sensitive you want this. The problem is it slows it down way too much and the dial doesn't seem to do anything. So that's useless too.

It has two extra bumper buttons which is awesome, and they can be programmed. I programmed mine for sick clicking which is usually sprinting and I always find that a bit awkward. So that's cool.

Another cool thing is the controller feels like it was made for people with normal sized hands, and fits much more confortably in the hand than the dualshock.

I think something like this is definitely needed. I'm struggling so much with the dualshock I'm considering selling my PS4 and getting an Xbox One. But the lack of a touchpad makes it useless. They may as well have neglected to put a trigger on it.
darksakul (1) on 23, Apr. 2014 03:52 (HKT)
Not a bad 3rd party PS4 controller
The Hori FPS controller for the PS4 isn't bad at all. It is comfortable to hold, the pad responsive, and the controller feel solid. I wish the surface of the controller is a bit more textured, over all it isn't a bad game pad.