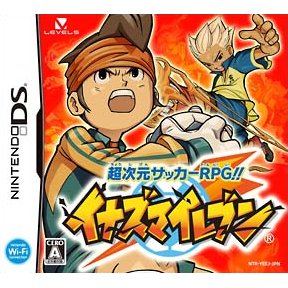 
Click on a thumbnail to see more pictures for Inazuma Eleven

Endou Mamoru, the captain of the soccer club in Manmoth junior high is facing a lot of stress, because of the lack of members in the team, the club is not qualified to participate in any official matches, furthermore, it's going to be dissolved if he could not recruit any more members.

Just in the brink of time, an ace striker Gouenji Shuuya transferred to their school, thinking the boy as a key to the club's salvation, Mamoru persuaded the seemingly taciturn boy to join, together, the striker and the goal keeper rewrite the history of the club.

Recruit members from the school and nurture a team spirit out of the members. Once you have eleven people, you are qualified to join matches. Make use of your touch pen during the matches to make passes and launch special skills from the command menus. Relive the famous moves such as God Hand.

Activate the Wi-Fi control of your DS and join in a game with your friends. There are more than 1000 characters to choose from in Inazuma eleven, make your own team and pit them against those of your friends.

If you are familiar with Inazuma Eleven, why not let others know?

maguti2723 (5) on 21, Mar. 2010 04:18 (HKT)
Great DS Game!!!
Inazuma Eleven is class through and through. I've sunk just over 20hrs into the game and I'm still having a blast. As one blogger said, its kind of reminiscent of Blitzball from FFX in that the team you create is just as important as your ability to play. There are hundreds of players to recruit, lots of formations, and tons of abilities to play around with. The game is gorgeous, easy to play, and offers hours and hours of enjoyment. One's enjoyment of the game is even greater if you have knowledge of Japanese, as the writing is quite funny and many aspects of the games deep play system may get lost without a knowledge of the language. I'd recommend this game to any DS owner however, even those who cannot understand Japanese as its fairly easy to learn how to play the game from experimenting. It is hard to classify the game, but I believe any soccer fan looking for a new take on the sport or even an RPG fan looking for something new will enjoy the game. My one complaint is that at times, the player is forced to sit through a lot of text. This is in part due to my slow Japanese reading skills but there is alot of text without a doubt. But again, those without Japanese abilities need not worry as your next destination if pointed out quite clearly with arrows and flags on the world map. By all means buy this game.
AngelFlare (9) on 20, Oct. 2009 00:20 (HKT)
Too Good
Having just the right kind of mix between RPG elements and sports, it's great for people who like both kinds of genres. Be ready for some crazy and sometimes hilarious special moves and characters; this game will definitely eat hours of your day away.
Although more of an RPG than a simulation game, you will be happy to be able to direct the movements of your entire team with your touch pen, telling them exactly where to go or where to pass the ball. The music is extremely catchy and pretty, and the game makes great use of the sound capabilities of the console; the spoken lines here and there sound great. As for the videos, they are anime-styled and look great on the screen as well.
The game makes perfect use of the touch screen; although there is a lot of action you have no reason to be afraid of scratches.
Inazuma Eleven is an addictive game; the only drawback is the lack of an English version, so if you don't know Japanese it might be a bit more difficult to pick it up. However, the controls are very simple and once you get used to them you can enjoy this fun game.
gknhrd4l (3) on 22, Oct. 2008 07:55 (HKT)
Really fun game
Its like eye shield and shaolin soccer mixed together to make a great RPG. you can recruit and train players, learn special movies increase attack and defense. To be honest i'm not even a big fan of soccer or at least not to the point where i could watch it. the controls take about 10-30 mins to learn or at least get used to. i do want to let you know that this is not your average soccer game you might want to learn a bit more about it before getting it just so you know what its all about other than that i highly recommend it its amazing will replay and probably replay it after that.