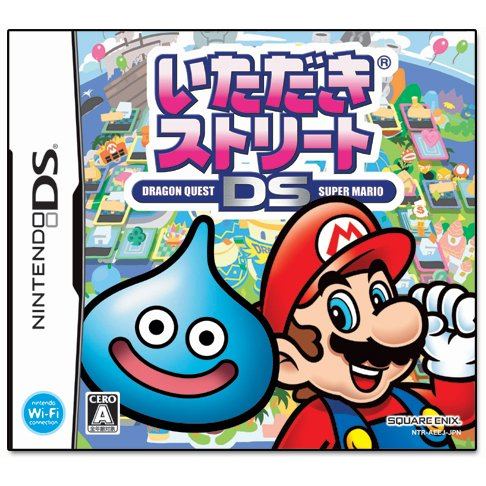 The Legend of Zelda: Phantom Hourglass
US$ 54.99

If you are familiar with Itadaki Street DS, why not let others know?

balamb_gardener (2) on 17, Jul. 2007 19:40 (HKT)
Fantastically Fun & Addictive
A very sophisticated and fun Monopoly-stye electronic board game, with a host of well-known videogame mascots thrown in for good measure.
Far better multiplayer features than in previous versions, and still as playable elsewhere as the recent Playstation 2 and PSP versions of the game.

Even if you don\'t know Japanese, if you\'re willing to play a few times and learn how the game works, the language will prove no barrier.

Top-notch handheld entertainment!
Cesar Hernandez-Meraz (15) on 11, Jul. 2007 03:49 (HKT)
Lots of fun for the road!
If you have played the other versions of Itadaki Street you\'ll know what this game is about. If not, think Monopoly with a lot of extras and your favorite characters from Dragon Quest and Super Mario.

Even if you do not understand japanese there is no reason not to play this game. Learning curve is not bad, and soon you\'ll be playing it as a pro.

This series will make you hate these characters whenever they win because they had a lucky throw, but that\'s the level of adrenalin you\'ll feel.

Graphics are more cartoony now than they were on Final Fantasy versions, but they suit this one very well, since it uses Super Mario characters. Music and mini games are equally fitting.

During a game, characters can now talk to each other, and will be seen way larger than on the PS2 Itadaki Street Special (when they spoke, they were just a face inside a circle).

The only reason I don\'t give this game 5 stars is because it doesn\'t have 18 characters from each series (for a total of 36), but only 11 each (unless more are well hidden), which may seem too little.

It is forgiven because the game lets you create your own \"Mii\", and then buy items to customize your look even further. As a collector, I really appreciate that, since that means I will spend hours playing (which is fun by itself) in order to unlock all the available items.

Don\'t think about it anymore, just buy it now and see what makes this series so fun!