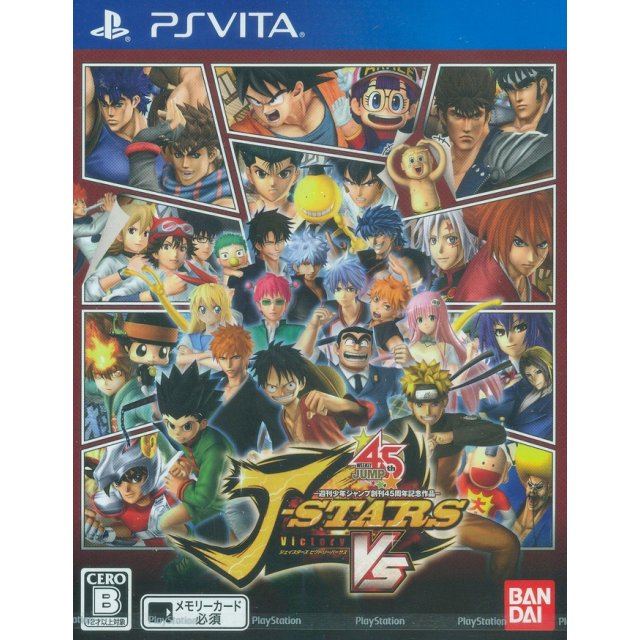 The Biggest Jump Ever:

In celebration of the 45th anniversary of Shonen Jump Magazine,J-Stars Victory VSis perhaps the most ambitious Jump title of all time. By combining only the most famous of characters from the past, present and even future and pitting them into glorious battle, this title from Bandai Namco ispoised to betheultimate Jump game!

Gameplay is based on battle between3 man squads consisting of2 mains and 1 support; mix and match to create the ultimate 3 man team! As well, arenas andstages will be set in the respective universes from each of the franchisesfeatured in full detail; environments are breakable, which makes complete sense based on how powerful the contenders are.

Leaps Over the Competition:

If you are familiar with J-Stars Victory Vs, why not let others know?

ghoulfever (9) on 27, Jun. 2015 17:54 (HKT)
interesthing game
the game is fun and the pictures are like real.there are lots of character from the popular jumps anime/manga.i like the finisher because it is magnificent.;]
The Wrath Buddha (21) on 07, Mar. 2015 17:39 (HKT)
kool game but can get stale fast
I often find myself feeling like i should take a break now and then so that i dont put the game out entirely. While its great playing as your favorite all time characters i felt the controls abit annoying but thats my opinion. The online portion can be a bit laggy but its more of what region your in to begin with.
I love the concept of the game amd hope if another game is made then they can do a little more with keeping my attention gameplay wise
Imation (464) on 06, Mar. 2015 09:18 (HKT)
Wonderful
Fast action, many fighters selectables, tons of options, extra durability of fun!
infernoimp98 (1) on 27, Dec. 2014 10:46 (HKT)
Worth it.
If you are a big Anime fan you should get it. But the Online gets Laggy all time.
strife2188 (149) on 08, Sep. 2014 13:04 (HKT)
very good game
it is one of the best fighters I've played in a while
1 »