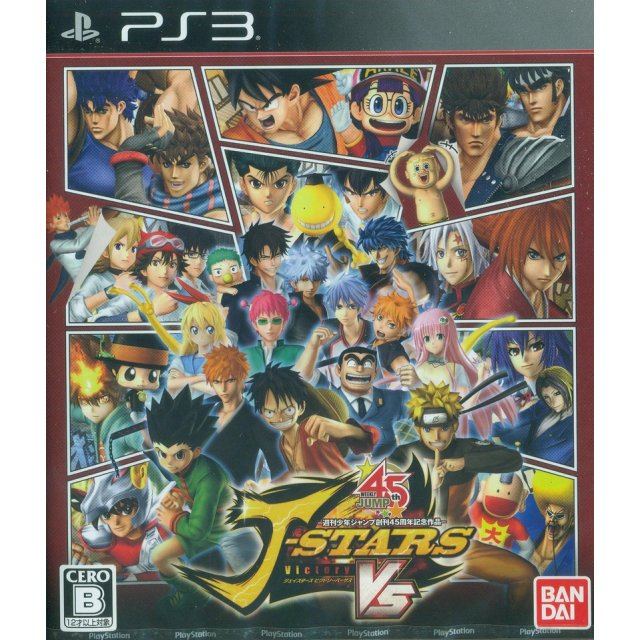 Works on all systems sold worldwide, a correct regional account may be required for online features.
24h In stock, usually ships within 24hrs
(Only 1 left in stock.)
Price
US$25.99
Our previous price:
US$ 75.99
You save:
US$ 50.00( 66% )
Play-Asia.com Return & Refund Policy
Trustpilot
Trustpilot
Click on a thumbnail to see more pictures for J-Stars Victory Vs

The Biggest Jump Ever:

In celebration of the 45th anniversary of Shonen Jump Magazine,J-Stars Victory VSis perhaps the most ambitious Jump title of all time. By combining only the most famous of characters from the past, present and even future and pitting them into glorious battle, this title from Bandai Namco ispoised to betheultimate Jump game!

Gameplay is based on battle between3 man squads consisting of2 mains and 1 support; mix and match to create the ultimate 3 man team! As well, arenas andstages will be set in the respective universes from each of the franchisesfeatured in full detail; environments are breakable, which makes complete sense based on how powerful the contenders are.

For multiplayer, thereis support for splitscreen mulitplayer for 2 players and a 4 playeronline mode where players can form teams of their choosing.

Leaps Over the Competition:

If you are familiar with J-Stars Victory Vs, why not let others know?

(For The guys who dont understand German. I just wrote how fast the game was by me and how amazing the game is even then if I dont understand the laungeuge^^ and sry for the gramma im just to lazy to write it right.)
asgardian (2) on 08, Feb. 2015 22:53 (HKT)
Best Figting Game Ever!
Son Goku, Monkey D. Luffy, Himura Kenshin, Uzumaki Naruto, Urameshi Yusuke and Kurosaki Ichigo in one Fighting Game. Need I say more?

Well, maybe this. Too bad Roy Mustang, Saber, Rider(Iskandar), Archer(Gilgamesh), Kusanagi Motoko, Nagato Yuki, Misaka Mikoto, Erza Scarlet and Ueki Kosuke can't be in this game. tsk.
leandrodoudement_ (1) on 23, Dec. 2014 06:22 (HKT)
No title
If you are a fan of shounen animes , this game will bring you lots of fun . The only problem is the online mode which have to be played on JP servers , so its laged , and takes a time to find a game .
1 »