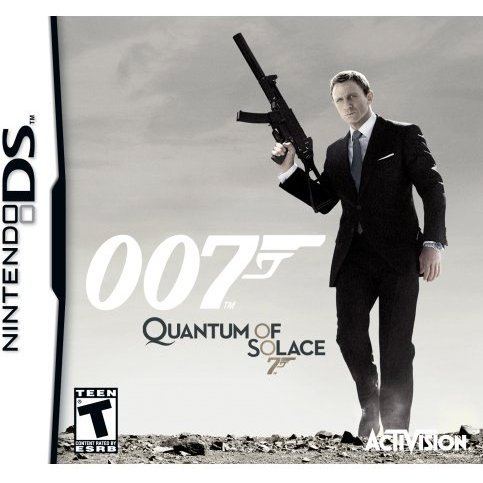 Works on all systems sold worldwide, a correct regional account may be required for online features.
1w Expected stock arrival within 1 week.
US$18.19
Our previous price:US$ 24.40
You save: US$ 6.21( 25% )
Manufacturer
Activision
Rated By Our Customers
Compatible With Nintendo DS™ (NDS™)
Version

Works on all systems sold worldwide, a correct regional account may be required for online features.
1w Expected stock arrival within 1 week
Price
US$18.19
Our previous price:
US$ 24.40
You save:
US$ 6.21( 25% )
Play-Asia.com Return & Refund Policy
Trustpilot
Trustpilot

Coldly efficient...dangerous...the new Bond is the ultimate weapon in today's ruthless world of international espionage. Blending first person shooting and third person action, Quantum of Solace the Game puts you in control of Bond's greatest weapon - his mind. You must think like Bond and intelligently use the map and situation to your advantage. Confront enemies in a variety of ways: take them head on, fire from behind cover or sneak up silently and eliminate them with a variety of special takedown moves. Based on Quantum of Solace and Casino Royale, Quantum of Solace the Game puts you in the dangerous world of international espionage and intrigue.

If you are familiar with James Bond: Quantum of Solace, why not let others know?

this game was fun is worth a low price if you can grab it for cheap.

(to be honest I enjoyed James Bond Blood Stone much much more. This, however, is a movie tie-in and a FPS game and Blood Stone is an original story and 3rd person action)
[This review is based on another version of this product]
byasha (345) on 11, Aug. 2011 10:50 (HKT)
great game
a great game for James Bond fans.
[This review is based on another version of this product]
bell_watcharaporn (43) on 05, Jul. 2011 22:12 (HKT)
Quantum of Solace delivers realistic gun play in a first person shooter James Bond universe. In allowing scenes from Casino Royale to enter the game play Quantum of Solace carries on the now great James Bond video game tradition started with Goldeneye, allowing the gamer to participate in more of James Bond’s world and missions. Even without the four person arena (for the PS3) Quantum of Solace delivers the experience of N64’s Goldeneye. Fear not online play is available for the PS3, Xbox 360 but it is the Wii that has both online and split screen local multiplayer options.
1 »