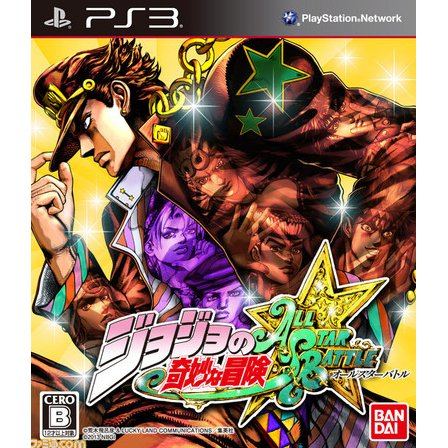 Works on all systems sold worldwide, a correct regional account may be required for online features.
24h In stock, usually ships within 24hrs.
US$14.99
Our previous price:US$ 27.99
You save: US$ 13.00( 46% )
Manufacturer
Bandai Entertainment
Rated By Our Customers
24h In stock, usually ships within 24hrs
Price
US$14.99
Our previous price:
US$ 27.99
You save:
US$ 13.00( 46% )
Play-Asia.com Return & Refund Policy
Click on a thumbnail to see more pictures for Jojo no Kimyou na Bouken All-Star Battle

Mobile Suit Gundam: Extreme VS (Playstation 3 the Best)
US$ 3.99

If you are familiar with Jojo no Kimyou na Bouken All-Star Battle, why not let others know?

pauloredline (169) on 14, Jun. 2016 08:38 (HKT)
Surpreendente
Um excelente jogo esse Jojo, lembro de te-lo jogado no PSX em 1999 e tinha esquecido de como essa série tem potencial para se tornar o ótimo jogo que ele é.
bobyanov (9) on 30, Dec. 2015 19:44 (HKT)
For all fans of Jojo and beyond
This neat vs fighting game set in the JoJo's universe delivers pretty nice, colorful anime graphics and hectic gameplay. Characters are varied and interesting, special attacks are cool and even spectacular. It's obvious that not only fans of Jojo can enjoy playing it, but also the broader audience of 2D anime style fighting games as a whole.
CharleSketch (10) on 04, Jul. 2015 08:57 (HKT)
Your next line is
Jojo's Bizarre Adventure All-Star Battle is definitely a game for fans. The mechanics are a bit shaky at times and the flow of the battles can get stiff even after you get used to how it plays; still, this is a damn excellent Jojo game that's bursting with fanservice. Story mode covers the very basics of the story of the series, and after completing each part you have access to the same fights but playing as the opponent. It's a simple way to give you more stuff to keep yourself busy with in single player. Through campaign mode you can get a bunch of alternate costumes, taunts and victory poses for all character, extending even more the life of the game. While it's welcome so many different alternate costumes are available in the game without having to pay for them, the DLC characters are quite a bummer. Leaving somewhat important characters such as Lisa Lisa or Old Joseph as paid-for extras seems a bit iffy to me, not to mention to crazy price they go for (in the japanese version at least).

When all it's said and done, this is a fun game. It may barely hold water to someone who isn't familiar with the Jojo universe, but if you're a fan you owe it to yourself to play this game. The game isn't perfect, but if you think you can get absorbed by the sheer fun of being able to see Gyro duke it out with Caesar in Dio's Mansion, you'll forgive any flaw you come across.
[This review is based on another version of this product]
r-r-rivers (2) on 22, Jun. 2015 21:50 (HKT)
di molto bene
If you're a jjba fan i would definitely recommend this, it references so much from the manga and it's so good, it's extremely enjoyable and i can definitely tell you that you will at least spend 20 hours playing this game and if you're a really big fan you can easily up that to 50 and still not be done
it's very fun to play online as well and even the dlc is worth buying.

i myself went for the limited edition and the soundtrack is really really nice, the golden plate with giorno on it is beautiful and very easy to set up, the jotaro figurine is also of very high quality and really pretty, setting it up is also quite easy
the box itself is also a beauty and overall i would definitely recommend the limited edition as well (that and you get some free dlc promotion codes) though the game itself will be in japanese when you buy the dlc but it's not that hard to find your way around it even if you don't understand japanese