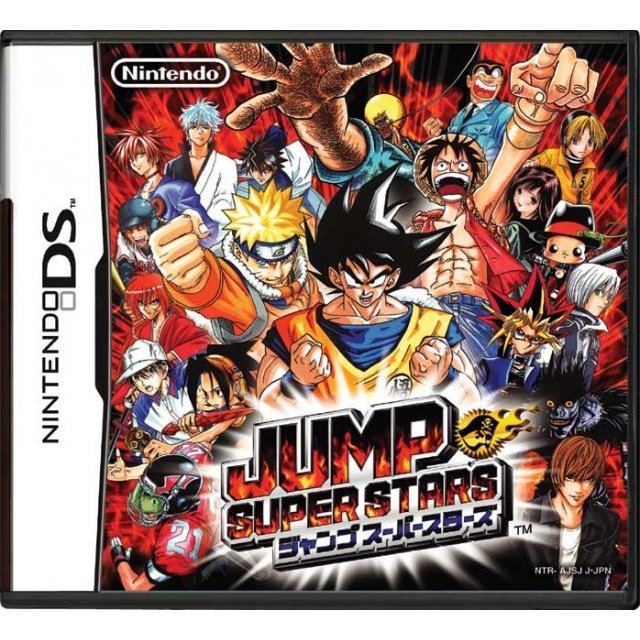 Works on all systems sold worldwide, a correct regional account may be required for online features.
1w Expected stock arrival within 1 week.
US$79.99
Manufacturer
Nintendo
Rated By Our Customers
Compatible With Nintendo DS™ (NDS™)
Version

Works on all systems sold worldwide, a correct regional account may be required for online features.
1w Expected stock arrival within 1 week
Price
US$79.99
Play-Asia.com Return & Refund Policy
Click on a thumbnail to see more pictures for Jump Super Stars

Be prepared for one of the biggest anime fighting spectacles ever! As a result of a powerful collaboration between the famous Japanese Jump magazine and Nintendo of Japan, a total of more than 150 characters from 27 different anime/manga series have come together to duel in this Nintendo DS™ game.Included in the impressive lineup are Goku from DragonBall Z, Naruto Uzumaki from Naruto, Monkey D. Luffy from One Piece and many more. And how else could it be, the title takes advantage of the dual-screen and touch panel functionality of the DS system to optimize its gameplay. While the action is taking place on the upper screen, manga sequences are shown on the touch panel.Jump! Super Stars features a J-Spirit gauge to perform special moves. Once the gauge is filled, your attack power is greatly increased and you can unleash powerful combo attacks. With help and support characters, up to 6 fighters appear on the screen at the same time. Up to 4 characters can play via W-LAN.

If you are familiar with Jump Super Stars, why not let others know?

davidbrake79 (10) on 25, Mar. 2009 06:56 (HKT)
the 2 best nintendo ds game
very very very fun to play i like playing as is sasuke,
kakashi,luffy,ichigo,allen,jotaro they are all awsome to play as
dragonup378@yahoo.com (2) on 12, Apr. 2008 10:45 (HKT)
finally
ive played this before and am soon going to order this and ultimate stars from play asia as an anime fan and fighting fan this is the perfect gamecfor anyone else with this taste and i use to like naruto but it kinda sucks now drag out fights and to much focus on sasuke who i hate i watched one piece first and its better anyway so now i can finally wail on the naruto characters asses with onepiece characters but i still have some sympathy for naruto characters anyway a fan of anime or fighting all together this is a must buy for sure
rma95 (2) on 07, Jan. 2008 10:08 (HKT)
This is the BEST!
this game is really good.
it has characters from all of your favorite shonen jump mangas/animes. If u are a fan of shonen jump/manga or just fighting in all...GET IT!
efvalle (1) on 12, Dec. 2007 04:36 (HKT)
OMG
I cant wait for this game! It is already shipped! It is going to be awsome! It my first naruto ds game so its gonna be cool! Over 30+ characters, many missions, and it makes it awsome because instead of just beating the game easily in english, it gives you a hard time in Japanese which im currently learning! Well anyone who likes fighting games and naruto this is the game for you!
kathyweathers (14) on 25, Jun. 2007 08:53 (HKT)
jump super stars
Jump super stars is one of the best games I\'v ever played on the DS but the only thing I wish they had was Itachi Uchiha and Kisame from naruto oh and BROLY from DBZ to.
1 »